The Justification of Strict Hate Crime Laws by Motive

With new data suggesting that crime based on underlying prejudice is soaring, the public is increasingly taking note of the recent uptick of hate crimes. As reported by the Center for the Study of Hate and Extremism at California State University in San Bernardino, the biggest cities in the country have witnessed a cumulative 44% rise in reported hate crimes. In cities like San Francisco, their respective police departments reported hate crimes against Asian Americans and Pacific Islanders to have increased by 567% from the previous year. Collectively, society has not had prominent debates on whether hate crimes should be prosecuted or not. Rather, these debates revolve around the degree and aggressiveness of prosecution towards hate crimes, relative to other crimes but with different motives.

The concept of what constitutes a crime as a hate crime is often demarcated by the combined, societally-understood definitions of the terms ‘hate’ and ‘crime’. However, hate in the context of a hate crime instead refers to an underlying motivation based on bias that contributed towards the crime. Thus, a hate crime is not always subject to textbook-defined hatred for someone or thing, but is rather an illegal action that a criminal was motivated to pursue based on their bias. Although some can argue that everyone has an inherent, even hidden bias that can help contribute to wrongdoing, a hate crime involves a bias that stretches vastly beyond subconsciousness. I will expose and discuss the determining factors that grant hate crimes to be punished more severely than the same crime without a biased motive.

Delving into cases that center around the concept of a hate crime, it is important to look at the historical progression and judicial decisions made for these cases. First, in 1992, the U.S. Supreme Court overruled the decision made by Minnesota’s Supreme Court regarding R.A.V. v. City of St. Paul, Minnesota. In this case, the Minnesota Supreme Court ruled that the burning of a cross on a black family’s lawn was a violation of St. Paul’s Bias-Motivated Crime Ordinance. This city legislation deemed it a misdemeanor to “place on public or private property a symbol, object, appellation, characterization, or graffiti, including, but not limited to, a burning cross or Nazi swastika, which one knows or has reasonable grounds to know arouses anger, alarm or resentment in others on the basis of race, color, creed, religion or gender.”

However, the Minnesota Supreme Court decision was a reversal of a trial court’s decision, and the Supreme Court overruled the overruled. Ultimately, it was an opinion written by Justice Antonin B. Scalia that found St. Paul’s ordinance to unconstitutionally restrict free speech. Yet, what is most notable is the inconsistency of decisions made by courts of varying levels.

Similarly in 1993, the Supreme Court once more intervened in Wisconsin’s Supreme Court decision for Wisconsin v. Mitchell. This case involved a young African American male, Todd Mitchell, who encouraged and incited his group of friends to severely beat a white boy after watching the horrors of the movie Mississippi Burning. Initially, the Wisconsin Supreme Court followed the constitutional logic of R.A.V. v. City of St. Paul, Minnesota, ruling that Wisconsin’s hate crime laws violated the defendant’s rights to Free Speech. This countered an initial sentence for the defendant of 7 years, prolonged by hate crime laws. However, the Supreme Court rejected the state court ruling, instead ruling Wisconsin’s hate crime laws to be constitutional. Not only do these two cases consecutively prove the contradiction between different courts, but it also shows the inconsistency within one court – the U.S. Supreme Court.

Given the perplexing rulings that often contradict rulings from different or the same court, the confusion seems to be pinpointed to the constitutional assurance of the First Amendment. The most recurring theme of objections to hate crime laws, with a legal precedent of Justice Scalia’s opinion, is violation of free speech. Arguably, the majority of hate crimes committed involve a defendant’s speech, thought, or other form of expression. These freedoms of expressions can sometimes be less protected in scenarios unrelated to hate crimes, such as fraud, speech that violates intellectual property law, and valid threats to another individual or entity. Namely with threats to an individual, the defendant can be prosecuted to the law in a way that undermines the protection of the first amendment. Moreover, someone’s particular bias that contributes to the action in a hate crime should be considered roughly identical to a threat. Without the underlying bias and thus motive, numerous hate crimes could not be prosecuted further than other cases with the same crime but a different motive or the absence of one. Therefore, in many instances of hate crimes, the first amendment holds less significance when societal or individual safety is being affected at the same time.

With Wisconsin v. Mitchell, the case centered around the violence-inciting words of encouragement by Todd Mitchell to beat up a white male. These words were not protected by the First Amendment because there was a greater societal safety consideration. With hate crimes increasingly taking the form of attacks towards minority or marginalized communities, more light is being shed on the societal non-negotiable necessity of safety and order. To some degree, this logic is much comparable to the legality behind stay-at-home preventative public health measures. In non-pandemic environments, it is unconstitutional to mandate that people stay home and businesses shut down or operate at limited capacity. However, with the significance of public health considered, such a mandate is no longer unconstitutional. Likewise, societal safety and well-being can similarly be taken into account over freedom of expression with hate crimes.

In any courtroom setting, the defendant’s motive, any apologies, a plea of guilty or not guilty, and anything conceded or admitted to becomes a cornerstone of a jury’s verdict and a judge’s sentencing. Since motive is already considered, there is already a differentiating factor between a random act of crime, purely out of accident, in contrast to a passionate, deliberate crime. Left unresolved is if a biased motive is an additional aggravating factor.

Throughout the discussion of past hate crime verdicts, there was an overarching acknowledgement of inconsistencies between courts and interpretations of freedom of speech. Additionally, there should also be an underlying understanding on the difficulty and subjectivity of measuring bias. When a crime is committed, objective facts are trivially preferred over hypothetical thoughts of someone – unless they admit to thoughts that led to their hate crime. Regardless, one way to measure bias is to target biased motives. Biased motives in the context of hate crimes are followed through with actions whereas bias in thoughts can even be a subconscious fixture of society.

By targeting biased motives, honing in on the intention of actions, and critically investigating whether hate crime laws are a threat to free speech, it is unequivocally true that hate crimes should be punished more severely than the same crime with different motives. To confront a fierce incline in hate crimes being committed, a societal understanding of how hate crimes should be prosecuted will have a positive impact towards reducing this startling phenomenon. Especially relating to a fundamental issue of safety and well-being, it is imperative that we begin to avoid fear of action and instead fear inaction. 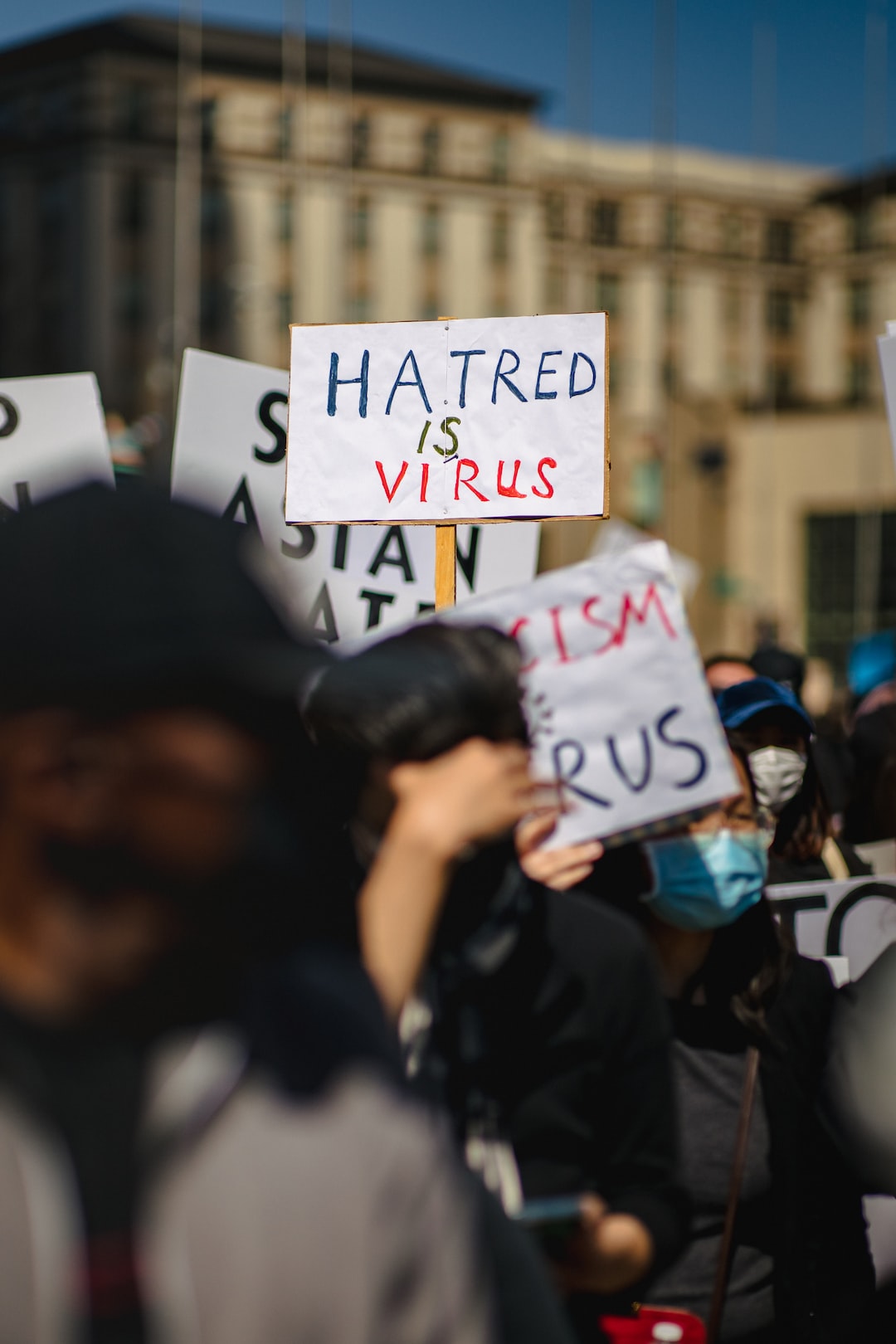 Photo by Jason Leung on Unsplash

A native to Southern California, my name is Andre Lombardi and I am a student at Arnold O. Beckman High School in Irvine, CA with medicine and public health encrypted in my mind; music steadfast in my heart.

Introduced to the hurdles my mom endured when diagnosed with colon cancer, I am eager to research and pursue tangible solutions to health and STEM issues, both on a population and individual scale. Through the organization which I founded, Kreative Kiddos, my peers and I can inspire those in under-resourced communities to partake in an interactive STEM education. Ranging from leading an InterSTEM chapter, an organization raising awareness on emerging STEM issues, to recruiting medical professionals for a medical club, empathy and time management have taught me the necessity in allotting time towards allowing others to progress STEM in addition to my personal efforts.

As an organ fanatic — that is, the instrument — various competitions, masterclasses, and technically-demanding instruction have molded my creativity. Through leadership in the Orange County American Guild of Organists Chapter, I have not only advanced my technical and musical abilities but have also encouraged peers in music yearning to learn more about the instrument.

I aspire to study medicine, public health, and the musical arts.