After seven years at war with Iraq, are we finally ready to end the war? Well, the events leading to the war were, almost, irrelevant. Also, some such as the 9/11 terrorist attacks on the World Trade center and the Pentagon happened with or without our input. The U.S. justified the invasion by claiming that the country had been hiding weapons of mass destruction also known as chemical and nuclear bombs. In addition, to remove the tyrant that was Saddam Hussein. Moreover, the ultimate reason of invasion was w.m.d speculation.The terrorist attacks on the World Trade center set of a chain of events that flowed into the "Shock and Awe" Bombing in Baghdad. The war initially started on March twentieth, 2002 when the bombing of Iraq started. Previous to this occasion was that when former President George W. Bush gave Saddam and his sons, Uday and Qusay, forty-eight hours to leave Iraq or face attack. Afterward, on March twenty –third Saddam and family leave Iraq. Then, on April fourth the Saddam International Airport was captured by U.S. troops and renamed Baghdad International Airport, Subsequently, on July twenty-second Uday and Qusay Hussein are reportedly killed. Finally, on December thirteenth Saddam Hussein was captured. As you can see, these events were a major part of just the beginning of the war.

Although we’ve seen the ups and downs of the war, the increase and decrease of casualties and of course the cost. After research the results of it still remain unclear. But we can tell the range is between nine-hundred billion to three trillion dollars. People seem to be debate over the cost, because people can’t seem to agree, between the conspiracy theorists and pessimists and the Wolf Blittzers of the world, nobody can seem to come up with one answer. But surely we can all see that the war has taken impact on not only our economy but the Iraqis too.

Equally important, are troop casualties. Around 4,430 American deaths have occurred. Other collation troops, or supporters to the U.S., casualties are around three-hundred and sixteen. Furthermore, around 48,000 U.S. troops remain in Iraq. And all other collation troops have withdrawn from Iraq. In conclusion, we can see that our army numbers are affected by the war in Iraq.

The United States has many allies in the war, including the United Kingdom. Britain has suffered around 346 casualties. Most British troops are now in Afghanistan. Other allies to the U.S. include Australia, Poland, Italy and Spain. In short, the U.S has received support from various countries during this war.

A big part in any war is the weapons used. In Iraq they use several ground weapons, aircraft and munitions (arsenal). We know that the U.S. and coalition troops frequently use Humvees and LAV-25s as ground weapons. Other artillery used are F-15cs and C-130s also, Harriers (aircraft). There munitions include Agm88 and MK-82c. In addition, Iraqi soldiers us AK-47s and T-72s as ground weapons and Scud Cs (munitions).

After seven years of war, and two different presidents the government finally declared the end of combat. Even though, all other countries have withdrawn, around 50,000 military advisors stay in Iraq. President Obama declared at the end of August last year those troops would begin to withdraw and are expected to be completely out of the country by 2012.
Although inspectors have been searching Iraq for years, they have always come up short when it comes to weapons of mass destruction. Basically, the United States justified our invasion with speculation of w.m.d. Also, no vouchers have been found. The main goal may have just been to remove Saddam Hussein from power. As we can see, this may be the case because even some of the U.Ns best inspectors have found nothing.

Unfortunately, the war in Iraq has followed a different war, The Persian Gulf War. Also, President Bush has also referred to it as, "Operation Iraqi freedom" insisting that Iraqi citizens could have a republic after the U.S. finally leaves Iraq. In addition, we see that this is affecting the Iraqi people, for they have war in their own back yards. It also affects American citizens. Americans have suffered loss of family and friends and also money. It also takes effect on the surrounding countries. Also effecting the Iraqi people is the major looting that took place in the early stages of the war. National Museums had been stolen of priceless items. Soon enough, the U.S. worked with Interpol ( the international criminal police organization) to track down the stolen items. When the war came to Iraq, due to looting, so did anarchy.

In the mist of the war the Iraqi Governing Council (IGC) was created. A U.S. state department official Paul Bremer created the IGC in July 13, 2003. The IGC included representatives from Iraq's ethnic groups and religious groups. Yet, Bermer retained vetoing powers.

In conclusion, several things led the U.S. to believe that Iraq was hiding weapons of mass destruction ,like a document that said that Iraq was planning to purchase "500 tons of Uranium from Niger in 2000." ( Fischbach, Michael R.,2004) Even though that document was later declared counterfeit. In 2003 total troops tallied up to 272,400 and in 2004 civilian deaths ranged from 8,000 to 10,000. Furthermore, the United States plans to withdraw until all troops are out of Iraq by December 31, 2001. 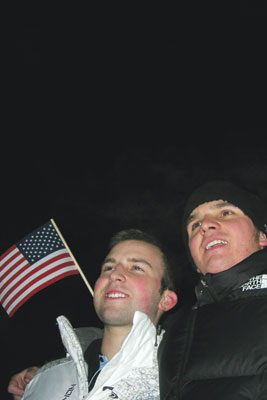