In the years 1350 CE-1750 CE, the history of Latin American societies can be divided into two categories: before and after the Spanish Inquisition. During this time the societies of these Native Americans have undergone dramatic changes, such as the Spanish and Portuguese conquering/ colonization of early Latin America, along with enforcing their own European beliefs and legal systems. However, despite this Latin American societies still retained continuity in their communal agriculture of traditional crops and some native languages with the help of Native American devotees.

Before the beginning of the European invasion, the societies of pre- Colombian America were complex civilizations with their own unique beliefs and transformations in their culture. One of the many major changes occurred in 1428 when the Aztecs became an independent power following years of its development of an imperial state and attempted rise to power. Following this event, the Aztecs expanded from present day Mexico City to the Mayan area, in the process influencing Mexica to become a stratified civilization under one powerful leader. From 1350 CE the Aztec empire had gone through a period of rise and development as its territory expanded over Mexico, bringing the authority of its powerful rulers and spreading a religious cult centered on military conquest and human sacrifice. As the Aztecs spread, so did their beliefs, incorporating the worship of multiple gods, ritual sacrifice, and animism, uniting the area of it influence as a form of political control and social unity. The Aztecs soon reached their height with the establishment of their capital, Tenochtitlan or “Foundation of Heaven”, a cosmopolitan conurbation with a population larger than some of Europe’s most fashionable cities, like Paris or Seville. As the empire grew, so did the border between the nobility and commoners as the Aztec society focused more on its hierarchy. At the same time the Inca civilization was also spreading its influence over the Andean area, rising to power with its centralized government and widespread agricultural irrigation. This conquest brought a phase of human annihilation, due to the mass murder of Latin Americans along with the arrival of foreign diseases, such as small pox, to which the natives had no immunity, causing the elimination of more than ¾ of the population. The alteration of American Indian tribes followed with the exploitation of the population, as the Spanish conquerors forced many natives into slave labor to work, for example on the destruction of its own places of worship to build Christian churches. Those who avoided the abusive labor requirements left their villages to seek employment in the city, and be replaced by European livestock. These new Spanish colonies introduced and enforced their system of government/economy and religions, while creating a fusion of traditions/ beliefs in its varied ethnic community.
Since the introduction of European influences in the Americas, the societies of Native Americans had changed dramatically, not including exceptions of continuity in their culture. One example of continuity can be traced to the social gap between the nobility and common and lower classes. Though the roles of different classes have been replaced by different ethnicities, the purpose of its hierarchy still defined the responsibilities and powers of each caste. There was also a continuance of ideology, as communities, like the Aztecs and the Incas, were united by common beliefs, based on polytheism, animism, and human sacrifice. Continuity also existed in Indian farming, as a traditional communal agriculture of crops was retained among the emergence of Spanish ranches. Furthermore, a common trait in social structure was preserved, as Latin American societies remained patriarchal, men holding the highest roles in politics and religion while women held the positions of mothers/homemakers. Double standards were shown in military position and education, as women enjoyed little rights in both departments, enforcing the gender inequality that existed. Despite these missionaries, there continues to be permanence in the disintegration of the Latin American societies from the late 14th century to the mid-17th century with the arrival of the European invasion. This incursion continued to replace the native background by building churches in place of their worshipping edifices and destroying the population with mass murder and foreign diseases to which the Native Americans had no immunity for.
Before the infamous Spanish Inquisition conquered South America and enforced its beliefs and culture upon the people, Latin American societies had their own political agendas and unique cultural patterns. The Aztecs in the first half of this period were rising to power with the help of their ideology to influence their land they were conquering. In time the conquered land would transition to being one of the most populated, metropolitan areas in the America while remaining a hierarchical/patriarchal civilization. The Incas were also going through a similar phase with their climb to power, caused by their innovations in politics and cultural achievements. Conversely, the rule of these regal societies would be interrupted with the Spanish intrusion, destroying the Indians’ way of life by replacing the original culture with their own cultural patterns. The transformation on Latin American societies from these changes and continuities led to a varied ethic population with a fusion off European and Native cultures. 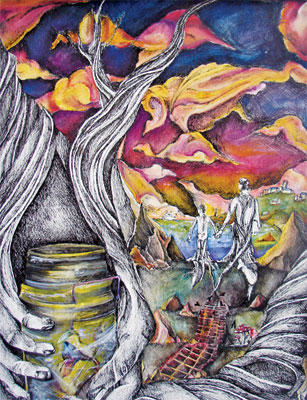 The author's comments:
2nd draft of Latin American essay, only some delected passages.
Post a comment
Submit your own