Favorite Quote:
"Be courteous to all, but intimate with a few and let those few be well tried before you give them your confidence." -George Washington

Bees are important insects. They pollinate crops and gardens so that we are able to harvest ingredients in many foods, and so that we are able to enjoy decorative flowering plants in our yards. Many people have noticed that there are fewer bees around. There is a growing concern over bees because they seem to be disappearing.

Marla Spivak used a slideshow of pictures during her presentation to illustrate her points and put emphasis on some others. This was really effective, and caught my attention at the beginning and kept my interest through the entire lecture. She appears to have done a lot of thorough research. She backs up her claims with evidence, and overall her presentation makes a lot of sense. She discussed four reasons that bees could be disappearing. The first reason she goes over is the different farming practices that are used today. Less cover crops, such as alfalfa and clover, have been planted, and bees need these crops (Spivak). The crops provide nutrition for the bees. These crops also act like natural fertilizers, so if these crops aren’t planted as much, farmers have to use more synthetic fertilizers. This could be part of the reason why bees are disappearing- these synthetic fertilizers contain ingredients that are harmful to the bees.

Another article that I located on this subject is a blog article that was published earlier this year. It describes an incidence of bees dying in Oregon after pesticide use. The pesticide that is being blamed is the pesticide neonicotinoid. This article strongly points to neonicotinoid use as killing the bees off. Neonicotinoids are highly suspected as being the culprits behind the decreasing bee population in the US and are strongly suspected to be killing off large numbers of honey bees as well (Beyond Pesticides Daily News Blog).

The second reason that bees are disappearing is the use of pesticides on a large scale. The residue from a pesticide gets into the pollen. The pesticides are toxic to the bees. Some pesticides, such as neonicotinoids, cause bees to die quickly. Neonicotinoids are ? The third reason that Spivak says is causing bees to disappear is the Varroa Destructor Mite. This insect sucks a bee’s blood, spreads disease, and weakens a bee’s immune system. This in turn makes them more vulnerable to the toxins in pesticides and fertilizers. The last reason Spivak says is hurting the bee population is the lack of flowering plants. There are less flowering plants around nowadays, so the bees have less pollen and nutrition available to them. This causes bee populations in some areas to cease to exist.

The fact that bees seem to be disappearing has caught the concern of other people as well. One article, titled “Beepocalypse Redux: Honey Bees are still dying-and We Still Don’t Know Why”, describes one thing that is affecting bee populations worldwide. The USDA describes Colony Collapse Disorder (CCD) and what its effect on bee populations are. They also go into detail about explaining the importance of bees and why we should be concerned that they are disappearing. They say that bees pollinate crops. If we don’t have bees around to pollinate our crops, the crops won’t grow, and the nation could experience a food shortage (Walsh). This a big concern because there are a lot of people in the US to feed. Also, the US exports a lot of food every year, and if the bees disappear, that would cause a definite shortage of food here, and that would cause problems for everyone. Also a food shortage would mean that there would be less food in the stores.

Her results? She found that each disease weakened the bees. As the bees weakened and got sick, they left the hive and died somewhere so that they don’t infect the other bees in the hive (Archambault). This means that there isn’t just one factor behind Colony Collapse Disorder (Archambault).

She describes her purpose behind her experiment. The disappearance of bees is causing food prices in the agricultural industry to rise because of a shortage of fruits and other plants, and is causing governments millions of dollars (Archambault).


My third source is another article, titled “Honey Bees Disappearing”. This article isn’t very detailed. It doesn’t provide a whole lot of evidence to support its claims, and it could have been more detailed. However, this article is well organized and presents its claims very well. The article is organized into 5 sections. Each section starts with a question. Overall, it describes a couple of reasons for honey bees disappearing, and also describes what we can do to help the bee populations.

The first two sections of the article describe what's going on with bee populations, and also goes into a little bit of detail as to why the bees could be disappearing. One claim that is presented is that colony collapse disorder is causing bee populations to decrease. This has caused the number of colonies in the US to drop. “This has caused beekeepers to experience anywhere from a 30% to 90% loss in their colonies (Beesfree)”. According to this article, some causes of colony collapse disorder are stress, malnutrition, mites, pesticides such as neonicotinoids, and genetically modified crops. The article also says that there could be many causes behind colony collapse disorder.
The third section of this article describes why we should care about the disappearance of bees. “Agriculture relies on bees pollinate the crops so that they grow, and so that we have food to harvest (Beesfree)”. The article also states that bees pollinate our gardens. Overall, this section of the article was really good at defining why people should care about bees.

The next section of the article describes what scientists are doing to help. The scientists are researching the causes of CCD. They are linking CCD to factors including the Varroa mite and the insecticide imidacloprid. The general consensus is that multiple factors are to blame, so improving the health of honey bees is seen as a potential solution.

The last section of this article describes what people can to do help the bees. A couple of suggestions are learning to respect honeybees and their role in the ecosystem, and plant attracting flowers in gardens and yards. A few more suggestions from this article are to “sponsor honeybee research, become a beekeeper, join a local beekeeper’s organization to become informed about care and keeping of honeybees and other steps that can be taken to help colony growth and combat CCD (Beesfree)”.

Now what can people do to help the bees in their area from disappearing? Scientists can improve their scientific understanding of things such as Colony Collapse Disorder, and take action to protect pollinators such as bees ("Honey Bee Disappearance (CCD) and What You Can Do "). The rest of us who aren’t scientists can take action as well. We can increase our awareness (and make other people aware) of the importance and fragility of pollinators and their role in our food supply and healthy ecosystems (“Honey Bee Disappearance (CCD) and What You Can Do”). We can also participate in the National Pollinator Week, which occurs in the last week of June. This is the week where organizations and people make others aware of bees and what affects the bee populations. People can also become Pollinator Partnership participants and take in part in several bee friendly activities such as planting bee friendly plants in yards and gardens, and on ranches and farms, reduce impact on the environment, and teach others about bees and other pollinators (“Honey Bee Disappearance (CCD) and What You Can Do”).
Another article provides even more ideas for people to get involved with bees. Becoming a backyard beekeeper is one suggested idea ("Silence of the Bees"). Backyard beekeeping is a good way to get involved, and also is a good way to provide bees to pollinate a mid sized garden ("Silence of the Bees"). The article also goes into detail about keeping a bee friendly garden. Keeping a garden bee friendly includes letting dandelions and other flowering wild plants grow, and keeping all pesticides and insecticides out of the garden ("Silence of the Bees").
This same article also goes into some detail about teaching and informing others about the disappearing bee populations. Talking and writing to senators and representatives in Congress on the federal and state levels about funding and supporting the research of honey bees and other bees is one way of informing people that is often overlooked ("Silence of the Bees"). Also,it's also important to teach our kids about bees as their demise will be devastating to us all, and kids need to grow up learning respect for nature (“Silence of the Bees”).
Overall, the general idea here in these sources is that there is a growing concern about the disappearance of bees. In fact, people such as Marla Spivak are asking us what we can do to help the bees and keep them from disappearing because they are so important. Now my question is: What will we do, as individuals and families, to help the bees in our area and keep them from disappearing? 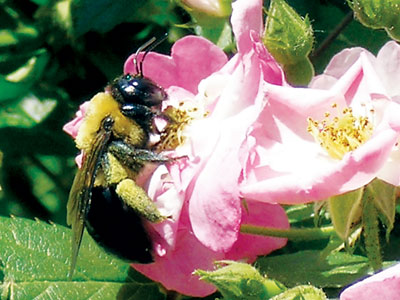 The author's comments:
This is a literature review that I wrote during my Senior Composition class. This is one of the best pieces of writing that I've done. I hope this piece will make people aware of the importance of bees, and I hope this will make people aware of what would happen if bees were to disappear completely.
Post a comment
Submit your own