I’m serious, take a chill pill, slow your roll, do something besides doing five different things at once, man. And don’t give me anything about living in the moment and making the most of each day and don’t even think about hitting me with that “There is no Tomorrow” bull crap. No matter how much you would like to be you are not a superhero; you are human and there is only so much you can do. You are going to burn yourself out!

This is what I would tell him nearly everyday. All of those late nights at school and at home, trying to finish everything he’s had tacked on to his to-do list. Kyle isn’t like most people. Where most people would eventually call it a day, saying that the task at hand wasn’t completed but was, “as good as it‘s gonna get,” Kyle will keep doing whatever it is he’s set out to do, and won’t stop until he’s done it and done it right. While I applaud him for his enthusiasm, this is a bad idea. Kyle, I think, sometimes, you just expect too much from yourself. You expect excellence, no, you expect perfection. Anything less to you is a disappointment and even you have to admit that it’s not possible. And he has admitted it. So why does he do it? I sometimes wonder if he even knows for sure. He told me that, “I just want to do my absolute best at whatever I do and excel. That‘s just me.” I’m pleased to say that he’s gotten better about it as time has worn on, but that hasn’t made him any less expectant of himself.

You’re a good kid, Kyle, but you can be the most forgetful guy I know. Really, how many reading assignments have you forgotten because of Digital Video? How many times has your mom flipped because you couldn’t remember what she said ten minutes ago, but you could recall the dates and highlights from the lives and careers of famous people? But it wouldn’t be fair to call Kyle absent-minded. Usually when he’s “ignoring” someone (or so they think) he’s simply busy thinking. I mean constantly thinking. When he’s with his mother, he’s usually thinking about everything other than what she’s talking about; the same thing applies with friends and family. When he’s with someone who’s obviously trying to put him down or get a rise out of them, he’s usually thinking a witty comeback or remark to piss them off. But he usually either stays quiet or responds to them as if he doesn’t realize that they are insulting him - this approach actually pisses them off more than the other one. Yes, Kyle is quite different from your average seventeen-year-old. (He almost seems to be both left and right-brained.) Unfortunately, he is almost obsessed with getting stuff done, not only on time, but the right way.

He’s also pretty quiet. He may just be a little nervous or maybe even uncomfortable. Really, it’s because he follows this one personal rule. “If I don‘t have anything meaningful or important to say,” he told me, “I usually don‘t say anything.” How many people do you know that would say, or do, something like that? I could count on one hand. But whenever he does have something to say, he talks just like he writes: witty, clever, funny and easy-going. He is one of the most laid back people you will ever hope to meet.

One of coolest things about him is how much he takes with him when he leaves the house. He certainly is a man of many things. On average, when he puts on his pants in the morning, he also puts on his house keys, his ring, and a chain bracelet he got from his grandmother for Christmas last year (he loves that thing). He then proceeds to fill his pockets with his phone, a pack of gum, and his flash drive, just in case. And, finally, he almost never leaves his house now without a backpack. Especially when he goes out of town. He even takes it to work. Most would be seen with a briefcase; he takes a back pack.

Everyone has flaws, and Kyle is no exception. He actually has two main flaws that tend to hold him back. The first is the standard that he holds himself to: if he doesn’t do better than what’s expected of him, he is no longer focused on, “the best you can”; if he does something uncharacteristic, like lose his temper, for example, he becomes angry at himself. I talked to him about it one day and what he said definitely surprised me. “I don‘t like being predictable. Any idiot can do the same stuff over and over; do what people expect him to do. It takes a lot to shake things up. Whenever I do fall back into the status quo, I‘m pretty disappointed with myself. But whenever I do things like lose my temper - things I would never do - I‘m almost disgusted with myself. I just hate it when I let myself fall off like that.” After he said that, I answered with the same thing I usually do, “What the hell is that?!” Kyle, you mean well, I know you do, and your heart is in the right place, but you can’t blame yourself for being human, man. That’s just not very good for you.
His second flaw is really pretty unfortunate. Growing up with no father - and soon joined by two siblings - he took up the responsibility to help raise the two. A responsibility that wasn’t his, but he took it anyway. “She needed help. Period. If I hadn‘t stepped up and started doing more, she wouldn‘t have been able to make it. She has enough to deal with as far as those two little ones go. She didn‘t need me as extra baggage. It just seemed like the right thing to do.” See where I’m going with this? Kyle is a guy that just gives and gives and gives. Only problem: sometimes he just gives too much. But he can’t help it. He just has an urge to do that kind of stuff. Whenever he sees someone in trouble, he does whatever he can to help them, even if its just to lift their spirits. It had gotten to the point where his mother accused him of being naïve. He isn’t. Kyle knows exactly who and who isn’t what they seem to be. He just gives them a chance anyway, because he knows exactly what it feels like to not be given a chance. “They wanted to drug me up,” he said, laughing. “But what did they know. Really, don‘t they just diagnose every kid with A.D.D., now? If Mom had listened to them, I would be drooling on myself in a corner somewhere. Really scary thought.” He tells me constantly that he “has no regrets” and “wouldn‘t change a thing” and I just can’t see it. I can’t see how when asked about his childhood he says, “It wasn‘t too bad.” Kid, you are just too optimistic for your own good. It’s not about giving people the benefit of any doubt, it’s about being realistic. It’s a cold, dark world out there. (Oh no, I‘ve become his mother!)

Kid, if you want my honest advice, take it easy. You’re doing a good job, but you may just be doing too much. And if there is ever a time when you have to ask yourself, that’s how you’ll know. Then you take a break. I don’t care how long. Ten minutes, five minutes, 90 seconds, just chill every once and awhile. (I mean, you chill quite a bit, but, you should chill a little bit more, you know?) You do all this kid and there is nothing you can’t do.


Much love and respect, 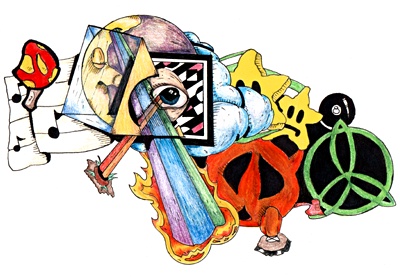 The author's comments:
What you’ve just read here is basically a self-prognosis. Just me looking inside myself to see if there are any improvements that need to be made. I do this every now and then, but this is the first time I actually ever got the idea to write it down. I am very pleased with my life thus far. All of this - the tears, years, struggle, love, hate, fear - has made me a stronger person. A better person. (And to my dad: I pray that the same is true for you, too.)
Post a comment
Submit your own

wombatz-rule GOLD said...
on Jan. 11 2010 at 4:33 pm
wombatz-rule GOLD, Montrose, Minnesota
15 articles 0 photos 53 comments
View profile
This is one of the best articles I have ever read. Seriously. It's not overly serious or depressing, but realistic. I've read a lot of your work that you've posted, and I am in love with it. You are, to put it simply, an amazing writer.