Just One of Those Days | Teen Ink

Just One of Those Days MAG

It was just one of those days where the only people on the beach were old couples bundled in blankets in beach chairs, sipping coffee, reading the paper and watching the surfers. The surf was gray and angry, reflecting the incredibly overcast sky. A fine mist clung to the air, our clothes, our skin, our sunglasses.

Yes, to those who wonder, lifeguards are on duty on crummy days too. The past three days we had spent huddled in the shack, watching the rain, playing cards, feeding sea gulls, and chasing out the few brave (or incredibly stupid) souls who didn’t mind gale-force winds or rain, wanting to try their luck with the raging seas.

We hadn’t bothered to set up much equipment, just the stands, flags, tarps, and line bags at two of the three beaches our crew was covering. We took long lunches, leaving three guards on our quarter mile of beach. It was just one of those days. We sat out in beach chairs at the base of our stands and tried not to freeze.

And that’s exactly what my partner and I were doing when it happened. She had her chair fully reclined and her face covered with a towel, dozing off. I was settled semi-comfortably in my chair, as bundled up as humanly possible in my suit, running shorts, and shirt under my big guard sweatshirt. My sweatpants were pulled down so my feet were covered, and I was wearing a winter hat. I had my hood up and a towel wrapped tightly around my legs. And I was still freezing. At the beach. In August.

I looked out at the kids playing in the water just to their knees. Good patrons, I thought as I turned my whistle over in my hands inside my sweatshirt pocket. All it would take was for one of them to lose their footing and I would have to go in after them. Then I’d have zero chance of warming up for the rest of the day. I sipped my coffee and settled deeper into my chair. Another day of doing almost nothing and getting paid for it. Nice.

“LIFEGUARD! LIFEGUARD!” A mother’s frantic screams ripped through the air. I jumped up, totally alert, a shot of adrenaline jerked me awake, and I began throwing off clothes. Darn, I thought, who did we miss watching that’s now caught in a rip? I got as far as taking off my hat, sunglasses, and sweatshirt when I saw a mob of people running toward me. I started toward them, trying to pull off my shirt but stopping when I heard a second cry.

“My baby! My baby! She’s choking!” Before I could think, a blue-in-the-face, unconscious child was thrust into my arms, her eyes rolling back in her head.

“She’s choking!” The woman screamed again before collapsing. I instinctively turned the baby over, supporting her weight on my forearm, and brought her down to my raised knee. I started giving her the baby Heimlich maneuver.

My partner came running over. I somehow knew, once again, what to do without thinking. I handed her the baby, who was no longer as limp, and she continued performing the Heimlich.

“I can’t watch this!” the mother screamed. The radio crackled in my partner’s hand. I grabbed it.

“Do you need a bump?” Someone from the next beach down asked, ready to send backup. For the first time since the baby had been handed to me, I was able to think.

“No, we need Mobile 2. We have a choking baby,” I said authoritatively, surprising myself, and began trying to clear some of the crowd. All of a sudden, the baby was throwing up.

“Put her on her side!” I shouted, and my partner held the baby on her side until she stopped regurgitating. I was suddenly aware of my racing heart, the adrenaline coursing wildly through my veins.

“Is backup coming? Did you call? We need 9-1-1!” said a lady, the baby’s aunt, I later found out, who was almost as frantic as the mother.

“Someone’s coming? Are they running?” she yelled at me. I peered nervously into the mist, searching and hoping with every subatomic particle in my body to see the vehicle’s headlights. Miraculously, they appeared.

A noise caught my attention. A whimper. Then a cry. Then applause. The father took his little girl. He had managed to remain calm throughout the whole ordeal.

With a roar and a small spray of sand, the truck screeched to a halt and the beach EMT jumped off with his bag. I quickly gave him a rundown of events. I looked around. Another guard from the next beach had arrived and was recovering from his sprint. I barely realized he was there in all the commotion. I was shaking from head to toe. I squatted and clasped my hands together tightly, trying to stop the shaking.

The baby, who I later learned was 13 months old, continued to cry as the EMT checked her out. Her father held her in a sitting position on the truck. He gently kissed his wife’s forehead when she came to stand beside him, her eyes red, her sister’s arms wrapped around her. Their little girl was going to be okay.

Police officers showed up with the ambulance, took down names, and made a report. We were still shaking and trying to process all that had happened. What had seemed like an eternity was only a few minutes. Family members came over and thanked us. People who had been watching told us what a great job we did.

I walked back to the stand, plopped down in the sand, put my sunglasses and hat back on, and finished my coffee in a single swig.

“That was the scariest moment of this job,” my partner said as she sat next to me.

“Pretty much, yeah,” I responded blankly, as I stared at the water and held onto my empty coffee cup with shaking hands.

It was just one of those days. 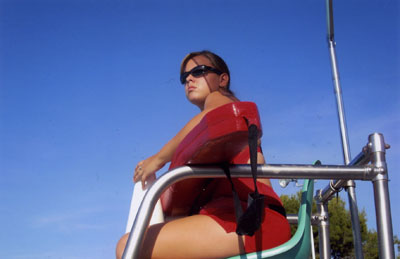 yankeedoodle2005 said...
on Nov. 22 2008 at 6:01 am
This is awesome! I'm a lifeguard, too--but I'm poolside, not waterfront. That's cool that you got primary rescue on a choking! I've never actually gotten a primary on anything other than water rescues, so I'm a little jealous. Way to go!
amberlene10 said...
on Nov. 22 2008 at 4:08 am
i really enjoyed this article.. wonderful descriptions thru out the scenes..i also loved how the character tries 2 return 2 normality after the dramatic scene..overall great piece!!