The Best Kind of Superhero MAG

I woke up just as we got off the highway at our exit. I peered out the window at the church I never knew the name of, at the familiar stoplights and street signs, marveling that no matter how deeply asleep I am, I always manage to wake up at exactly this point. The silent bends in the road, the dark passing landscape, gently rock me out of sleep. There’s something about home, I think, that transcends slumber, that penetrates the soul even when it is unconscious.

The rhythmic snoring from the back seat was mesmerizing, calming. My parents were sitting in silence. The moment was so lovely that I laid my head back down, feigning sleep, so that it would continue for just a bit longer – until we turned onto Bartlett Street and the potholes jostled the car, waking my brother and my sister too.

From the front seat I heard a sniffle. I peeked in the rearview mirror at my dad and saw tears gushing from his eyes. He didn’t even wipe them away; he just let them fall. Water pooled at the crevices beside his mouth and overflowed, streaming down his chin. Never taking his eyes from the road, he stared straight ahead. His hands, normally grasping loosely to the bottom of the wheel, were clenched around the rubber. His arms were flexed, as though he were competing in a NASCAR race, not meandering through the quiet back roads of Needham, Massachusetts.

The sound had to have come from my mom. Propping myself up on an elbow, I glanced at her. She, too, was crying, but with boundless emotion. Her chin quivered and her eyes were searching as she gazed up at my dad’s hard face and put her hand over his on the wheel.

He didn’t seem to react. He did not look at her. But I noticed a moment later that his hand loosened a bit, and his knuckles, so white, returned to their normal color.

Don’t you think you should pull over or something? I wanted to ask, but was hushed by a rush of sadness so powerful that it seemed to physically force my head back onto the headrest. I felt clobbered; a dull pain throbbed in my neck and my mouth felt dry and shriveled. I had no idea why they were crying, but nevertheless tears began to prick my eyes and constrict my throat, making it difficult to swallow.

My mom and dad remained still, past the library and through the winding neighborhoods I knew by heart. I lay quietly, trying to control my breathing, determined, for some inexplicable reason, not to be discovered awake.

We turned onto Highgate Street, and my dad twisted to look at my mom. The silence was so thick I felt as if I could hear the muscles in his back realigning, see the phantom words he longed to say forming behind his pursed lips. I was struck with an uncanny desire to reach into the trunk, grab one of our oversized beach towels, and soak up the interlacing streams running down his face. Instead, I struggled to keep my fluttering eyelids closed.

As we pulled into the driveway, I pretended to wake with my siblings. Not saying much, I carried my suitcase to my room, changed into my pajamas, and crawled into bed. I felt drained, but sleep did not come.

I’d seen Mom cry often – during sappy movies, while reading the Chicken Soup books, through my whole fifth-grade graduation, even at my singing recitals. She’s a sucker for sentimentality.

So the reason the incident struck me, then, was because of my dad. I’d seen him cry before – at family funerals, even when my brother was born, I think. After all, I realized, everyone is supposed to cry at these occasions. When I was younger I would pinch my eyes shut, willing the tears to trickle down my cheeks, convinced that if I didn’t cry it would mean I wasn’t sad or ­happy enough.

But in that instant, I understood that my dad was not the person I’d always thought he was. My dad, who’d been an Eagle Scout, who saved lives every day and balanced my mom’s anxiety with his unshakable calm, was susceptible to pain. I now saw that he’d concealed it when he could because he felt that he had to, because he knew that we were relying on him.

I had always likened my father to a superhero, capable of escaping worry and sadness and doubt. The discovery that my dad was not, in fact, invincible should have disappointed me, should have shattered my childish image of him. But instead, it only made me admire him more. That night, my dad’s facade crumbled, and that did make me sad. But he was still as strong as ever. Sure, my dad wasn’t an impervious superhero anymore – he was a human superhero, and to me, that made him even more incredible. 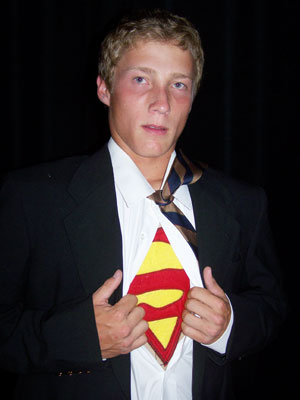 Favorite Quote:
"Never part without loving words to think of during your absence. It may be that you will not meet again in this life."

View profile
yes, wow, this is written in such detail and imagery. it's beautiful! yet, i am curious...was your dad crying because you were going to a funeral or why was he crying??
emziart66 BRONZE said...
on Sep. 21 2011 at 8:53 pm
emziart66 BRONZE, Cary, North Carolina
3 articles 6 photos 9 comments
View profile
That was amazing... By the way, I live in Needham, MA.
RosieB. GOLD said...
on Aug. 30 2011 at 12:35 pm
RosieB. GOLD, Torrance, California
15 articles 3 photos 6 comments
View profile
This story is incredible. At first, I was like, 'Can you please get on with the story?' But at the end of your piece, I realized that it's not about what happened, it's about how it changed your relationship. Beautiful story, beautiful message, beautifully written. Good job :)
Annieboo SILVER said...
on May. 12 2011 at 9:17 pm
Annieboo SILVER, Salt Lake City, Utah
7 articles 5 photos 55 comments

Favorite Quote:
Some one who gets tricked is a fool. Some one who trusts is an even bigger fool. But if you get tricked and tricked again...and still trust...that's makes you the best person to know.

Favorite Quote:
"Our truest responsibility to the irrationality of the world is to paint or sing or write, for only in such response do we find the truth."
- Madeleine L'Engle

i feel like the beauty of the story is that it's a mystery as to why he was crying. it's touching

Favorite Quote:
"Life may not always be what you want, but life is all you've got; so stick a flower in your bellybutton and be happy!"

View profile
I love it. Not only the story, but that way it was written.
AthenaBook SILVER said...
on Feb. 13 2011 at 7:19 pm
AthenaBook SILVER, Arlington, Virginia
5 articles 0 photos 36 comments

Favorite Quote:
You should not live the way the world asks, but the way that you ask of yourself.

View profile
As many others have said, this was a really moving, thoughtful piece. But I do think that you should have explained what he was crying about.... I get that the dad can still be strong when he is crying, but you said that he has been seen crying before. Why is this time so different and scary???
A_Jean PLATINUM said...
on Feb. 13 2011 at 3:38 pm
A_Jean PLATINUM, Citrus Heights, California
40 articles 0 photos 19 comments

Favorite Quote:
"we all carry these things inside that no one else can see. they hold us down like anchors and they drown us out at sea."
"i'm trying to figure out which parts of my personality are mine and which ones I created to please you"

View profile
That was really wonderful. But, why was he crying?
WindDancer GOLD said...
on Jan. 22 2011 at 7:03 am
WindDancer GOLD, Lexington, Kentucky
10 articles 3 photos 77 comments

Favorite Quote:
'Your going to die anyway so you might as well craft.' The Anticraft

Favorite Quote:
love is the key to everything

View profile
That was amazing.  :)  You are a great writer and should definitely continue.