“We Will Rock You,” “Somebody to Love,” “We are the Champions,” and “Bohemian Rhapsody” are just a few of the long list of hits rock legend Brian May has either written, composed, or played. Besides being the guitarist and back-up singer in the band Queen, May also has a Ph.D. in astrophysics. Meeting him was a dream come true for me, as Queen is one of my favorite bands. What I learned was that not only is Brian May an amazing and talented musician, but he is also one of the nicest and most down-to earth people ever.

Natalie: You have a Ph.D. in astrophysics. Did you ever use your scientific knowledge when recording songs with Queen?

Brian May: I sort of do mix the cultures, I suppose. I do have some scientific instincts which are quite useful in music. I used it for the delays on “We Will Rock You” and the way we recorded it. It was a long time ago, and it was before you had machines which could make the delays for you with prime numbers, and I had figured out a way to do it at that point. There are tricks with production, and I love production, but the reality is, the center of everything is the song and the singer. That's the truth of the matter; all the rest are toys.

Queen started taking off, you went back to pursue an education. What advice would you give teens who want to follow their dreams but also get an education?

School can be kind of irksome, because a lot of the time it seems to tie you down and try to make you uniform, rather than encouraging your creativity. But I do think you should try and stick with it as long as you can. There is going to be a lot of great stuff that you're going to be able to pick up from school that you're not going to be able to pick up anywhere else later in life. I stuck with my schooling, and I went to a university and did the whole bit, and it wasn't too late to be a rock star after that. I had to be patient for a while.

Can we expect new music from you this year?

Yes, absolutely! I'm involved with a lot of stuff. We still have “We Will Rock You: The Musical” out, which is all around the world these days. It has been going on for ten years, and we are all very involved with that. It's kind of a part of the family.

My big project recently has been with an artist named Kerry Ellis. I am producing an album with her, and she is a stupendous singer, and I need a stupendous singer to do my thing. There is no use in me doing this wonderful, big production and playing passionate guitar if I don't have a singer. The album is out, and it's called “Anthems.” 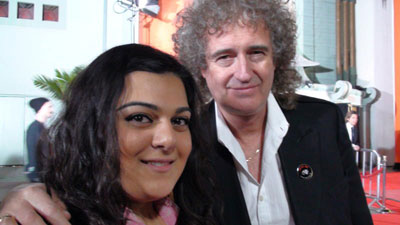