Educator of the Year | Teen Ink

Educator of the Year

Warming up before my match in the tunnel at the Kohl Center, anxious for my debut at the Wisconsin High School State Wrestling Tournament, I see the thousands of people cheering and screaming, creating a tornado like atmosphere. By my side, the only person capable of getting me out of my own head before a match, is Coach Ferrell.

Every time I hear that, it hypes me up—especially when my head feels like it’s going to pop from a perfectly timed case of the flu.

While my head gets cleaned up, and blood flows down into my eye, he hypes me up again.

“You’re still in this. I’m right here! Finish this match strong. Get your escape and get to your offense!” Coach Ferrell possesses an unparalleled energy level.

Unfortunately, that match ended with a real life result and no Hollywood ending.

Even though I finished far from my goals at the state tournament, it was rewarding to see I had a coach who stuck by my side—win or lose.

As I walk off the mat, Coach Ferrell stops me. He says, “Take a look around, and take it all in now.”

I look around, and in that moment, I heard Coach say, “Next year you’ll be on the podium, and I’ll be putting a medal around your neck.”

That became the motivation that drives me to work harder and get what I want come February next year.

Coach Ferrell is a perfectionist, as well as a motivator who demands I give my best effort. He pushed me beyond what I thought my limits were, and helped me achieve greatness. I have learned more from him in one wrestling season than I have in all the years I’ve endured high school. His classroom is a hot and humid wrestling room where he molded a group of high school kids into a state qualifying team ready to take on whatever came at us.

There were practices I can recall kneeling on the mat, watching the sweat bead off my face like rain and make a lake beneath me. No matter how grueling it got, I knew that lake held my fate. So I’d get up and push myself harder, especially when coach is standing right next to me, carefully observing my technique. It’s because of those moments I achieved the things I did: Regional Champ, Sectional runner up, and 2019 State Qualifier, as well as 2019 Team State Member.

Coach Ferrell told me from the beginning that I’d be making the trip down to state, and even when I lost, he still believed it.

This is me saying thank you to a coach who believed in me the whole way, and to his family for everyday, letting us borrow him, as well as for the encouraging notes and gift baskets they made for us at state. Although this probably holds little to no weight, I truly believe Coach Ferrell should be inducted into the Wisconsin Coaches Hall of Fame, and nominated to receive this award.

I will never forget walking out of that tunnel at state, or the long list of other things he has done for me. A great coach is one who you remember forever, and teach you lessons that apply beyond the classroom, in this case, the wrestling room. Coach Ferrell certainly had that effect on me. 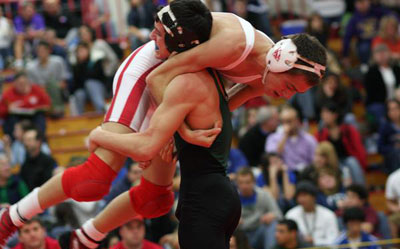