My interview with the Ambassador to Sweden, Her Excellency, Banashri Bose Harrison | Teen Ink

My interview with the Ambassador to Sweden, Her Excellency, Banashri Bose Harrison

Her Excellency, Banashri Bose Harrison is a retired Indian diplomat. HE has headed the commercial wings of the Indian embassy in both Budapest and Washington DC. HE held the prestigious title of Indian Ambassador to Sweden and Latvia, from 2012 to 2016. HE was also the Joint Secretary dealing with Central Europe. Since retiring in 2016, she has worked on the Tasting India Symposium.

1. What were your academic interests as a teenager? Was it an experience or an event that made you interested in the realm of Diplomacy?

You must realize that I am a bit of a dinosaur. I was born in 1956 and at that time when we were going to school, the children basically did what their children told them to do. We didn’t really have I think either the mind, mental makeup, or the information network that you people have today. So you just went along with what your parents advised you, and my schooling was in science subjects mainly because my father thought it gives you more options, which was indeed the case. After having studied science in High School Secondary, I realized that it was not my cup of tea. I wanted to study something more connected to the real world, I was more attracted to the subject of economics which I thought was both a science and an art because economics is one that touches everyone’s life every day and yet it is a science. So, my academic choices in the early years were made more because I tried something and then realized this is not what I wanted! I continued to study economics at my master’s level, and that’s a subject which really interests me even today though I really do not keep abreast because it's too vast a subject. So, that is my interest and there was no real experience that attracted me to diplomacy, in fact, to be quite honest, even though my father himself was a civil servant, serving the government was something that he wanted me to do. There were three of us and my father was very keen that one of us should be a Doctor, the other an Engineer, and the third should join the civil service in his footsteps. So, my elder sister became a Doctor, my brother became an Engineer and I really did not have any option and I moved towards government service.

2. Which colleges did you attend for your higher education?

I went to Miranda House in DU and did my BA Honours there and then I shifted to the Delhi School of Economics and did my Masters there. I started doing my MPhil at the Delhi School of Economics but did not complete it. After joining the Foreign Service, one was the Oxford University where I did a diploma course in International Relations in 1989–90 and later, I did a course on National Security at National Defence College in New Delhi. I also taught economics for four years in Miranda House

3. Why did you decide to take the ICS examination?

There is no separate exam for IFS, the main difference used to be that the interview was given. After the exam, You give your options when you fill in your form, in that you indicate what services you would like to be I gave the IFS, that was my only option. My father as I mentioned to you was in civil services and in 1976, our then government had imposed a national emergency and during that phase, my father was very disturbed by what he had to do as a civil servant. He was forced to do things that the government wanted, which he was not comfortable with his conscious. This is why I only opted for the IFS. One, I did not want to face the danger of having to make a choice between my integrity and my job. The second reason was I always had a great interest in the world in traveling and for the people of my milieu, lower middle class, going abroad was a dream.

4. What were your first few assignments at the IFS?

My first assignment was of my choice, I went to Paris. In the IFS, you join in a particular merit list, depending on how well you have performed in the exam. I performed very well in the exam, I was among the top 30 of the successful candidates in 1981. The first posting in IFS is the language training posting. You go to a country and learn the language that is spoken, you learn it and pass an exam. I opted for French as I was interested in French literature and culture. I came back to India and then went to a very interesting European country, Hungary. After Budapest, I went to a very little known but charming island called Reunion Island, which many Indians would have never heard about even though they know its well-known neighbor, Mauritius. Reunion Island was fascinating because it has 1/3rd population of Indian origin, it was amazing to see how well they had conserved the culture, though they had lost the language. They were French-speaking thus I was posted there. The position is called Consul General and then I came back to India and I had a very interesting posting as a Director dealing with our neighbors barring Pakistan, a very fascinating assignment.

5. What did you learn about Heading the Commercial Wing of the Indian Embassies in Budapest and Washington DC?

I headed the commercial wing in Budapest from 1991–94 and the commercial wing in Washington DC from 2006–2010. In 1991 Hungary was also changing, Hungary was opening up like India. Till then the India Hungary economic relation was a subset of India USSR relation. The business was conducted through inter-governmental agreements, not through open market competition. When I went in 1991, it was a lucky time for me, you had to educate the economic community in India about the changing features of doing business with Hungary which meant off course that you had to learn about the business opportunities in Hungary. At that time in Hungary, Hungarian was the only language spoken, so you had to locate the English-speaking people who could help the business community. 15 years later, India was different and the US was a very different ball game. It wasn’t trade so much that I had to focus on, but on trade policy, because it wasn’t the individual player. In the golden years of the Indian economy in 2006–2010, the Indian economy grew at a rate of 8 to 10% per year so for me as the head of the commerce wing in America, it was really very easy to sell and promote India. What in Hungary would in thousands of Dollars be in millions in the US. The interest of the companies was to affect government policy to make a business grow. Tata’s for example, wanted the commercial wing to spend time in the US Senate and try and ensure that the laws regarding H1B Visa. the US was liking playing tennis at Wimbledon.

6. You had also been assigned the prestigious role as the Indian ambassador to Sweden as well as Latvia, What were some of your favorite events or moments there?

One of the most satisfying moments for me was when I was the Ambassador in Sweden and after a long gap to bring Swedish companies with the Indian community and organized “Namaste Stockholm” in the most central part of which saw 25,000 people, it covered from yoga in the morning, cultural events and foods from different parts. To be able to present the diversity and richness of India to a Swede who has never heard about India, I needed to present India in the best light is to reach out to those who have not shown any interest in my wonderful country.

7. In what ways do you think India and Sweden can strengthen their relations?

What we used to call demographic dividend, young people like who are now fortunately with increased literacy and technological education, we have this huge and growing resource. And Sweden with its 9.6 Million population has been able to encourage the innovative capacity of this small population. With our great human resources, I think we can solve the problems of the world. I think the contribution that can come to the world from Indo Swedish collaboration is in environmentally sensitive technology. Sweden has always been very responsible with its attitude to the environment.

8. Latvia, is a small country in the Baltic. What is something interesting about the culture of Latvia you can tell us about?

Latvia was forcibly assimilated by the USSR, Even though the Latvians have always considered themselves independent. It’s a relative newcomer to Europe, and somehow they are very interested in India and I found it had moved much ahead of Sweden. Every time I went there I felt like was closer to home.

9. You have retired from Government Services since 2016, What have you been doing since then?

One thing is that when you are in government service that is true is you are never off duty. I can enjoy having a drink, but I cannot be seen on the streets being drunk because then people wouldn’t say Banashri is drunk, they would say the Indian Ambassador is drunk. You have to be very conscious of this responsibility. After I retired I was liberated. My husband and I have traveled a lot within India because I find India amazing. The one project I have been involved in is the Tasting India Symposium. In 35 years, I realized that Indian food is our USP. We are trying to come up with ideas to promote India’s cuisine attracting tourism and business.

10. Is a career in diplomacy rewarding? what is one piece of advice you have for aspiring diplomats?

To anybody who is interested in having a career in International Relationships, I would say there are challenges, you have to uproot yourselves every three years, causing disruption. There are challenges but the reward of representing this great country is an honor that you can only imagine and it is well worth every sacrifice that you would have to make. The essential quality that you must have is adaptability and openness of mind. 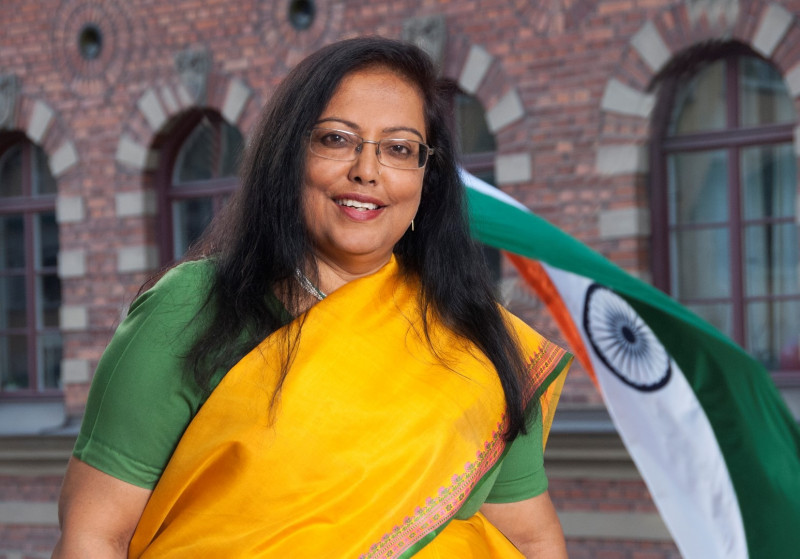