My mom comforted me with her warm embrace as the funeral went on. Miriam, one of my close friends was gone. Death. What happens after life ends? Is Miriam happy?

I sat on the grass of the cemetery and let my tears fall. She's gone, I thought. I'm never going to see her again. I let out another sob. How could this happen to her?

Miriam was only a year younger than me. I thought back to all the mischief we made. Who am I going to break the rules with now? I wondered. No one could replace her.

The rabbi finished his speech but it held no comfort for me. We were then supposed to say good-bye. But I couldn’t. I couldn’t imagine her always active body lying so still and her shoulder length brown hair no longer bouncing behind her as she walked. I wouldn’t be able to see her shining brown eyes look dull and dead.

I remembered when we met. I was on the Solomon Schechter school bus, looking for someone who also held a book in her arms, someone who might share my love of reading. Then I found Miriam and we sat together almost every day. We didn’t talk much but we had formed a close connection. We started lending each other books and talked about our messed-up teachers.

I remember one play date, we were sitting at the computer to write a story together since we both loved to write. Miriam found a program that spit out topics to write stories about that were supposed to be funny, but they ended up being really stupid. We spent the whole day reading them and laughing and finally settled on a drawing contest instead.

I also had fun when we went to the TJ/Milnes carnival together. There were so many rides that seemed fun, so we kept running from ride to ride trying to decide which to go on first. We both loved the more thrilling rides. We decided the rides there weren’t exciting enough, but we still had fun together. We agreed we would have to go to a real amusement park together sometime soon, but we couldn’t agree on which one. She wanted Great Adventure, but I wanted Six Flags. We didn’t realize that they’re actually the same place.

Another memory is ice skating together. We were arguing whether we would fall on our 13th lap because 13 is supposed to be an unlucky number. In the end we both fell on the 13th lap. We laughed and attempted to be superstitious for the rest of the day.

I also thought back to the last time I saw her. We were at a boring meeting, so we snuck out by saying we had to go to the bathroom. For awhile we hung out, just talking about school and how Solomon Schechter was going bankrupt. Soon we realized we had to think of an excuse to explain why we were gone so long. After spending five more minutes thinking, the best we could come up with is that the toilet got clogged. We didn’t want to go back yet so we decided to walk back in mini steps. Her small feet slid slowly, one in front of the other.

Soon Miriam took out her stopwatch and timed us to see how long we could take. About five minutes later, a man setting up for a party dropped a couple of plates, so we ran back to help him. We picked up the plates and handed them to the man who quickly thanked us and walked on.

When we got back, the teacher started yelling at us until we told her our new excuse, that we helped a party man cleaning up a mess. What we didn’t bother mentioning was that it took literally no more than thirty seconds. The teacher started praising us and apologizing. We grinned at each other and said it was no big deal.

Every week in synagogue, we would also sneak up to the Hebrew School and write messages on the boards like “I am watching you” or “food is delicious and delicious is food.”

Once we found out that the rabbi was giving a speech in a room later that night so we snuck into the room. We rearranged the chairs and Miriam found a toy banana peal that she placed near the door. We drew pictures of weird, little old men praying and wrote a few “interesting” messages on the white board.

On our way back, the janitor caught us and asked us what we were doing. Miriam calmly said that the bathrooms were full downstairs and that we had come to pee. I interrupted by whining that I still had to pee and he let us go.

At the lecture, the banana peal was missing and the chairs were in the right places but the janitor didn’t erase the board. Soon people were muttering and pointing. As the rabbi spoke, Miriam and I laughed at the possibility that the janitor tripped on the fake banana peal. No one else would dare do such awesome pranks.

We had once planned to start a club of mischievous kids to play pranks with but we never got around to it. Now I'm starting a club for kids who just want to have fun, breaking the rules. I call it MASP, “Miriam’s Amazing Secretive Pranks.” Now I have a group of pranksters under my command but none of them are as brave as Miriam.

My parents took me home from the funeral, and I sat on the grass thinking of her. I spoke to her. Even now, I speak to her in my head and wait to hear her answer. Some day we’re going to have a lot of catching up to do.

I never thought much about death before Miriam died. I don’t know what happens after you die, but I hope she’s happy wherever she is. Maybe she’s playing pranks on the angels up in heaven. 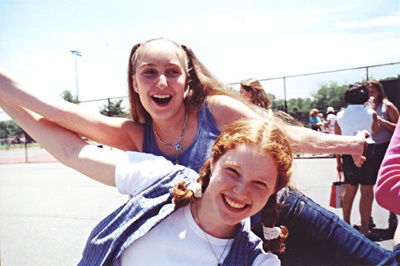 The author's comments:
I dont want to talk about it. i miss her
Post a comment
Submit your own