"I'm Better Than You"

People ask me what my pet peeve is, and it’s easy to answer: Wannabes. Not just social wannabes who think they’re totally popular but they’re not even close. They’re annoying, but what I hate is talent wannabes.

You know who I mean. The girl who walks into school showing off her new painting that everyone hates? The guy who shoots again and again without making a single basket? No, I don’t hate them; I pity them. They aren’t who I mean either.

Let me try and explain it in a simpler way. I’ll use something that isn’t even a talent: getting your period. Teen girls in my grade, especially the popular girls who I have the misfortune of having a gym locker next to, make a big deal over their menstrual cycle. Now, I got my period at the end of seventh grade, and I didn’t find it a big deal- more of a nuisance. I didn’t go around announcing it because I think it’s a private thing. A few months into eighth grade, all the popular girls starting getting their periods. So now, once a month, I get a highly amusing (well, I think so, anyway) show of locker-room entertainment, run by a crew of self-appointed Period Experts. I can tell that many of them only got their periods about two months ago and still don’t know even half of the torture that comes with cramps, but they talk in this nauseatingly superior voice, ‘complaining’ about how ‘horrible’ their period is. “Oh, the cramps. Sooo annoying, aren’t they?” (Cue fake moan at cramp.) “Yes, and have you even gotten the hang of PMS yet? OMG!” (Cue ‘accidental’ fall of tampon out of bag.) “Oops! This is so embarrassing! You guys saw my tampon!”

I don’t typically mind these shows, mainly because these girls aren’t worth my time and I don’t put that much thought into my bodily functions. But what infuriates me is when there is a writer wannabe. Now, I don’t mean to show off, but I just finished writing my second novel at 80,000 words, and I personally think it is very good (mainly from the editing experience, which is less torturous than I’d expected) and more original than all the vampire romances coming out lately. However, most people at my school just think of me as ‘the smart girl who’s always writing in study hall and always gets 100s on her essays,’ not having a clue about my actual writing.

My new group of friends are definitely a talented bunch of people- there are several artists and poets among the bunch, and even my good friend who proclaims herself ‘dumb’ is a great singer. And the friend I’m talking about here is actually a very good writer. Just… not that good of a writer.

A couple of weeks ago, she came in carrying a white binder she announced, very loudly, to be ‘top secret’. I joked that they were government files, but she continued to bug us about the secret until I finally went, “Alright, what is it?” She let out that it was a book some seventh grader she was friends with had written, and it was very good, and it was going to be published, despite the fact that she was not done with it. Okay. Good. I couldn’t help sulking in my head at the thought that she hadn’t even heard of my novel yet, but it didn’t really bother me. Until about three days ago, when I hear all my friends gathered around her, discussing what names they would want to be named in another life.

Curious, I joined in the conversation, asking what they were talking about. “Oh, (friend’s name) is writing a BOOK,” said one of my friends, putting a great emphasis on the word ‘BOOK’, as if to say, “Your 100-receiving essay is nothing compared to her BOOK.”

“Yeah,” said the friend who was writing the book. “I’m trying to come up with names to represent them. I’m putting all my friends in the book.”

“Really?” I asked. “So what do you think my name should be?”

“Ah,” I said, “I’m ‘not part of this’. Get it.” Having just joined their tight-knit group a few months ago, mainly for the purpose of getting some real human beings as friends to escape my old loser group, there were many times when they kind of forgot I was there. It wasn’t to be mean- I was like a charity case to them.

Except for getting a little surprised that she was writing a book, I ignored this new phase. But then they continued this. Every day, they discussed names. Then they discussed their characters. I never witnessed a single moment where my friend actually spent some time writing. I never noticed a pencil or a notebook or anything that indicated writing. But every day. “So what do you think my name should be?” “Well, your character’s going to be vuh-ery important to a plot twist I’m planning near the end of the BOOK.” “Where do you get your ideas?” “Oh, well, you know, I think of them by observing the people around me.” “I bet your BOOK will get published.” “Oh thank you, but my writing isn’t that good.” Seeing as it doesn’t exist, I am forced to agree, Oh Queen Writer of the Writerly Universe.

And then the fake complaints, like she hates getting the attention or something. “Writer’s block! Oh! So hard! Coming up with names! What a challenge! And those characters! Like they have a mind of their own!” First of all, you’re not qualified to make complaints like this until you’ve started actually writing; and second of all, as an actual writer, I can tell that she’s making this stuff up. This ‘writerly’ talk drives me completely insane. And third, when she talks to me, it’s practically condescendingly! “Well, I understand you wouldn’t know about writing this kind of BOOK. How long was your little story, anyway?” I was pretty mad by now, so I coolly replied, “Oh, a meager 80,000 words.” La-di-da. No big deal.

“Oh, that’s OK,” I said. “I understand you wouldn’t know about writing my kind of book.”

Really, when you’ve been tempted like this for two weeks, you can’t help being a little rude. 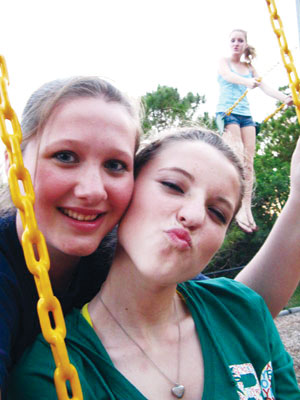 The author's comments:
I thought I'd talk about an infuriating issue with a touch of humor. Tell me what you think!
Post a comment
Submit your own

People like that are SO annoying. The kids in my Honors English class are always joking about writing books and stuff. Sometimes they'll come in with a couple of pages written and everyone will be all ga ga about it... I used to be that way, back when I first started getting into longer stories in upper elementary and middle school. By now I don't even show my friends most of my writing. But they automatically think that they're better than me, for some reason, because they aren't "scared to show off their writing" or something. UGH.