What's in a Name | Teen Ink

What's in a Name

Americans are a flighty, wild, spur-of-the moment people. They love whatever is popular and drop it after a few months, like a puppy with too many toys. Take Rhiannon, for instance, my middle name. It was barely known outside the British Isles until 1976. When Fleetwood Mac came out with their hit song “Rhiannon”. Suddenly, it was the 418th most popular girls’ name (Rhiannon, 1996). As the song’s popularity dropped, however, so did Rhiannon’s. It sat in the back and bided its time, waiting for Suzanne and Paul Jones to come along.

My parent weren’t average Americans, taken in by a wailing chorus of Rhiannon x 4. My mom had always loved the rhythms of names. Even before she was married, she remembers standing in the surf clapping out the names of her sisters and other possibilities for names. “Su-zanne Ni-cole. Kim-ber-ly Ann.” She married my father in 1993, and they were leafing through baby books long before my mother found out that she was pregnant with me in February 1996. Then they buckled down, writing up lists of names, crossing off mutually disliked ones, rating the remaining on a scale of 1-10 and averaging the results. They were market researchers on a mission.

Dad wanted at least one Welsh name. It had to be relatively easy to spell and pronounce, unlike Aislin, and pretty, a far cry from Blodwen or Non. It also had to fit Mom’s rigorous syllable requirements, mainly a name with two or more syllables, emphasis on the second. In the end, they chose Rhiannon. They had always liked its fluidity and beauty, but thought it too pretentious to be a first name.

With Rhiannon on her mind, mom settled down to have lunch in a bar with her sisters in the Olympic summer of 1996. It was brutally hot, they were starving, and somebody suggested Hayley Rhiannon. It clicked. My mom went home with an idea of a name, but not too much stress. There were still three months to go, after all.

Then I was born six weeks early. My parents had almost settled on Hayley Rhiannon for a girl and Aidan for a boy. My name might have been different two weeks, a month later. But I was born on September 2nd, 1996, so Hayley Rhiannon I was.

But what is Rhiannon? Who is Rhiannon? A Celtic or Welsh goddess, a woman so beautiful that men would chase after her for days on end, a stunning vision in white with flowing blonde locks and delicate features. She might have been the goddess of the moon, horses, fertility, magic, and certainly death (Campbell, 1996). Some myths say she carried three white doves on her shoulder; hearing their song would make the deceased live and the living fall into a seven-year deathlike sleep (Mutén, 2003). She was wily, patient, and fierce, and has slipped in and out of Celtic mythology unobtrusively, always appearing at a different point in time.

I was a stocky, plain child with curly brown hair and a face more cute than radiant. The only thing I shared with the goddess Rhiannon was a love of horses, and I could barely ride those. I was Hayley, nothing more. Nobody ever called me Rhiannon. It slipped quietly into a corner, the elusive R. between Hayley and Jones.

You have to give a nod to my parents for trying the heritage connection, but it didn’t work that well. I don’t know a word of Welsh and I don’t particularly like sheep. Nobody would take a glance at me and say, “Oh, she’s a Celt all right.” The closest anybody’s guessed is French, and that was when I was speaking Spanish.

Sometimes we sit in a circle in camps or class and say our full names. I’m proud, not embarrassed, to give mind. “It’s Welsh,” I tell them, “it means princess, or goddess.” I get a couple “what’s” and confused looks, but in the end Rhiannon runs away and hides again, lurking in the shadows.

So what is Rhiannon, really? The answer is everything. The answer is nothing. Or maybe it is something in between, something ancient that takes the back seat to a top-ten American name. But it’s there, waiting patiently, a song written in ten minutes for a name. The nymph, the goddess, the great queen. The middle initial of a girl who loved horses and was a descendant of the red dragon. The only thing Welsh about Hayley Jones, sitting in a box in the corner of the mind’s attic. Hoping for the day when she will climb the stairs, pick it up, dust it off, and remember what it means. 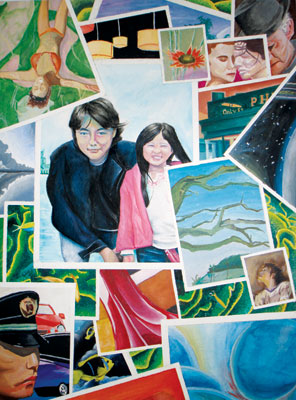 Favorite Quote:
"A hospital bed is like a taxi with the meter running"
-Anonymous