My Grandmother: A True Hero

Walking quietly down the hall, I stopped dead in my tracks, in awe. It was one o’clock in the morning and I could still hear my mom pacing back and forth from outside the room. I was supposed to have been asleep. She must have been worried about something. I kneeled down and tried to listen to what they were saying, but I couldn’t hear a thing. The pacing seemed to get louder and louder as time progressed. I didn’t want to take a chance so I went back to my room and fell asleep after almost an hour of tossing and turning.

Thousands of questions roamed my mind the next morning. What could possibly make my mother so worried? Why wasn’t my dad saying anything? Then again, if something really were wrong, my father probably would not have shown any emotion. At breakfast, I decided to bite my tongue and not mention what I had overheard, as I knew doing so would most likely get me into trouble. This turned out to be more difficult than I had anticipated, as I have always been curious by nature. “Pass the syrup.” There was a long pause. “Pass the syrup,” my father repeated. “Oh” I said picking up the syrup and handing it over. I knew I had been daydreaming. The rest of breakfast, which I knew considering the circumstances would be difficult, then took a turn for the worst. My father’s complete tone changed dramatically from the small talk to what was about to be one of the most worrying discussions I have ever experienced.

My father cleared his throat. I knew there was something on his mind. “Your grandfather found a lump in his throat.” “Now don’t get ahead of yourself, let’s not make any wrongful assumptions.” I felt my heart start to race. What could that mean? I then turned to my mom, who was silent. “He should be alright, but he is going to have to get that lump checked out.” “For now, we should all just be as helpful and considerate as possible.” Of course, my first reaction was concern. I didn’t know what was going to happen in the future. It was also very difficult to not understand exactly what was happening. It felt as if I was loosing control of everything in my life; my whole world was crumbling.

The next few days were chaos for my family. My mother and father were worried sick about my grandfather hoping that the tests would turn out okay. Then, we received the overwhelming news that stage four throat cancer was about to change my grandfather’s life.

To try and overcome his illness, the treatments began. My grandfather’s throat was burned by the radiation and the chemotherapy left him almost lifeless and very fatigued. He wasn’t able to speak at all and his voice turned into a soft, muttering, unrecognizable whisper when he tried to communicate. He also had to quit his job as a rheumatologist. He was seventy-one years old and was about to realize how fragile life can be at a time when he wanted to enjoy all that he had worked so hard for in life.

My grandmother would teach us all that when you come across a barrier you should fight it. You should stand up to it and make sacrifices to reach a goal. Don’t wait until it’s too late and most definitely do not expect people to do things for you. I never knew that my grandmother could teach me so much that I can still use today throughout my life. That is a true definition of a hero.

A few months passed and my grandfather kept pushing forward but required more and more support to get through a day. My grandmother, also known as “the energizer bunny” or “super women” was armed and ready. She knew that taking things day by day would make a world of difference in my grandfather’s recovery. She quit her bowling team and stopped meeting friends for meals when my grandfather could not go. These were sacrifices she knew she would just have to make.

Several weeks later, with all treatments completed, my grandparents came over to spend a few days with me while my parents were out of town. He was able to talk even better and seemed a little less fatigued. This small bit of improvement really proved to me how very strong my grandfather was. When we got back to my house, after running errands that afternoon, to greet them my grandmother was at the car taking suitcases into the house. She greeted us with a smile from ear to ear. I knew she was happy to see us. Inside, my grandfather was sitting on a chair at our kitchen table. He wanted to take in a small suitcase that my grandmother forgot in the car, but my grandmother wouldn’t allow it. “It’s too heavy for you, “ she said. That’s something I always admired about my grandmother: she is always looking out for someone else. The next few hours flew by as my grandmother brought in suitcases and got things settled around the house. My grandmother, who loves having everything neat and organized, began to clean our kitchen. The conversation was mostly small talk, but it was great to catch up with them, since they live so far away.

“So, how is school?” she asked while putting on her signature yellow rubber gloves. “It’s great,” I replied with enthusiasm. “My grades are very good.” “Good!” She seemed to be excited that we were all doing well. She then proceeded to ask about my brother, a college student. “Oh, he’s doing well just swamped with a ton of work.” “Yep, college will do that to you” she responded. “What can I get you for lunch?” she asked my grandfather. No answer. “Is there anything I can get you?” she asked again. “No, thank you.”

A few hours later, my dad came home from a long and strenuous day at work. He was exhausted but still sat down to eat with us. We had Chinese food. Unfortunately, my grandfather could not enjoy most of what we had bought because it either had too much spice, which would irritate his throat, or he would simply be unable to swallow it. At the dinner table, there wasn’t a lot of conversation.

My grandmother woke me up early the next day. We had plans to go to Montgomery Mall; my grandmother was looking for a pair of shoes. After we had shopped, my grandmother, being the organizational wiz that she is, took me along for the ride to Goodwill, to donate our old clothes. My grandmother drove me home after Goodwill, extremely tired. She put on her slippers and sat down to read a good book.

There are so many things that you learn by experience. Until you go through something, you could never comprehend exactly what someone is going through. Perhaps that is the hardest part of having a family member who has cancer. You can’t understand what they are dealing with. No matter how hard you try. My grandmother took what life gave her and chose to make the best of her situation, take things day by day, and give all she possibly could to help heal my grandfather. She chose to be compassionate, caring, and as understanding as she possibly could be. She put her needs second to my grandfathers because she knew it was the right thing to do. A hero becomes a hero by the choices they make. My grandmother chose to be a hero. 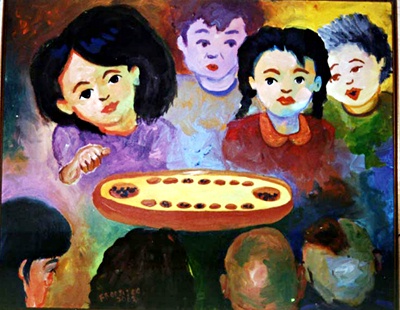 Favorite Quote:
"The people who are crazy enough to think they can change the world are the ones who do."
—Apple’s “Think Different” commercial, 1997
“Crazy people are considered mad by the rest of the society only because their intelligence isn't understood.”
― Weihui Zhou

View profile
Very emotional and heart-warming. I'm touched by this story. Beautiful wording and vocabulary. Congrats on the Editors' Choice. You deserve it. Keep writing pieces like this. They're enjoyable to read.
WallFlowerAlice GOLD said...
on Sep. 2 2013 at 8:46 pm
WallFlowerAlice GOLD, Milwaukee, Wisconsin
16 articles 0 photos 65 comments

Favorite Quote:
"Why wait when you only live once? Go out there dance, smile, and enjoy yourself! If your not having fun then darling your doing something wrong!"
- Therese

View profile
"I understand dearly I lost my Nonna three years ago to breast cancer, it was hard for my famil to continue on when she held us together," Said Alison," you are an extremly talented writer Well done!! Continued Alison.
Fallen_ PLATINUM said...
on Sep. 2 2013 at 8:26 pm
Fallen_ PLATINUM, Quakertown, Pennsylvania
25 articles 3 photos 433 comments

Favorite Quote:
You don't love me, because you don't know me. If you knew me you would't love me.
-Christofer Drew Ingle.

Favorite Quote:
"Do not go gentle into that good night. Rage, rage against the dying of the light" --Dylan Thomas

View profile
Wow this is really touching. And so true. Herodotus are born in the hardest of times. My grandmother suffered through cancer and battled hard. Though it was scary we were all there for her, and i am happy to say that she has been cancer free for a couple of years now i really love this. It's sweet and nice. Great job. Keep rockin and writing :)