from the Rivers | Teen Ink

from the Rivers MAG

I have always struggled with my lengthy, ethnic, and complicated last name; “de los Rios” has not only been difficult for me, however.  It has been especially difficult for the cashiers who have to ask for my name in order to look up my account. On the off chance they happened to speak Spanish, I’d say “Isabella de los Rios” and hoped they would type it in as fast as “Mary Smith.” Instead, they froze and hesitated to type. Almost every time, they’d look up and, with a smile, ask: “Is that all together?” or “Could you please repeat that?” or  “Sorry, could you spell that out for me?” So much so that D-E space L-O-S space R-I-O-S has become a code that I recite every time I’m checking out at Barnes and Noble or Urban Outfitters. So much so that I wished I wasn’t Hispanic and wished I wouldn’t have to drag these three words along with me for the rest of my life.

It wasn’t just these weekly, mundane moments that irked me, however. It was also how people butchered my last name. Over my 18 years of carrying the burden of having such an intricate last name, I’ve gotten: de la Rosa, del los Rios, delosrios, or De Los Rios. Most of these have the same sound, but they are still spelled wrong. Hearing my botched name spat out of the teacher’s mouth when calling attendance made me wince, but I would never tell them because it’s my fault for having such a bothersome last name in the first place.

It was always discomforting to hear my name being butchered at every assembly and graduation ceremony. It was like they were talking about an entirely different person, and that I shouldn’t be the one standing up to receive that diploma. They called for Isabella de la Rosa. I’m Isabella de los Rios; she should be getting it, not me. I hesitated to walk to the podium to receive my diploma and it felt like the chair was grabbing me, whispering, “Don’t go up there, that’s not your name.” When I would receive certificates with my last name misspelled, I always wanted to hand them back and say, “This isn’t mine, it doesn’t say my name,” but I never did. I just hid them in the drawer filled with other misspelled certificates. I would never confront someone who mispronounced my last name because it wasn’t their fault: it was mine.

So, over the years, I’ve adapted my last name to take on different forms such as “dlR” or “Rios.” You know, something easier and faster for teachers and cashiers to say or write. It was a little odd being called something that wasn’t my name, but I went along with it. Then, I realized it wasn’t just as simple as erasing the “de los” from a piece of paper and leaving my name as “Isabella Rios;” it was more than that. I was inherently erasing away a huge facet of “Isabella de los Rios.” I was removing my heritage, my culture, and everything that was held within those three words and four syllables.

Sometimes I catch myself writing “Bella Rios” on a quiz or essay, but the regret hits as soon as my pen leaves the paper. That’s not my name and that’s suddenly not my work. Why would I waste my life calling myself by a name that isn't real? This made me feel worse than any teacher butchering my name during attendance because I had become the one abusing my last name and turning it into something it is not.

I would tell people that I was going to legally change my name when I turned 18 to “Bella Rios”, just to make life easier for everyone who had to write or say my name. But now at 18, I have no desire to alter my last name and disregard its significance. My last name literally means “from the Rivers” and to me, “ from the Rivers”  represents the sound of Latin music filling the living room, the smell of sancocho in the kitchen, and the warmth of family crammed at one table eating arepas with carne desmechada.

I could spend hours lying in bed, staring at the ceiling, just thinking about how different my life would be if I wasn’t Hispanic. Would it really hurt to lose such a big facet of my life? Would losing that “de los” really mean that much? I would think about how different my life would be when I married someone with a common last name and, therefore, would never have to worry about it being butchered again. That didn’t necessarily erase my heritage, but it would be a good way to cover it up. Sometimes I would wonder how different my life would be if English was my first language. Would that change how people viewed me? I wondered if my parents were born in America and not Colombia and Venezuela, what type of food would we eat? Would we even know what arepas are, or would we just eat hamburgers? Would we drink chicken noodle soup on our sick days instead of ajiaco? Or what if my parents played The Beatles instead of Maná on road trips?

It came in short bursts of realization, like a light bulb twinkling until it gleamed. I realized that those three, troublesome, and tortuous words were not something just meaninglessly written on a quiz or a certificate. What they represented flowed through me. It was the blood that travels through my veins and the DNA that differentiates me. Those three words, “de los Rios,” are a marvelous burden. So, I made a promise to myself that I would never let the extra ten seconds that it takes to spell out my last name to a cashier, or the one second someone mispronounces my last name, undermine its significance. My name is Isabella de los Rios and I will never become another impersonator or fraud of my own self. 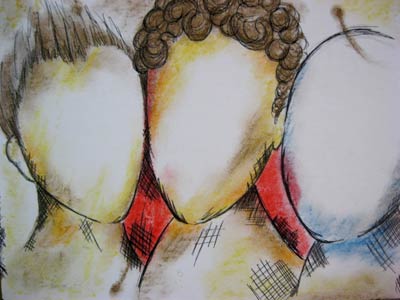 from the Rivers allowed me to put my thoughts into words and explain my origins and my culture. As someone who has struggled with self-acceptance, being able to write this piece truly helps express those feelings. This essay allowed me to illustrate my internal battle with my identity and how I overcame it.