Cracks in the Pavement | Teen Ink

Cracks in the Pavement

Favorite Quote:
"If you want a friend be a friend."


"That's cool. Hey you know what's even cooler than triceratops? Every other dinosaur that ever existed!"
-Dwight Schrute The Office

I never liked visiting my grandmother’s house, it smelled like mildew and old age and her two cats left their hairs everywhere. I can recall spending long hours sitting on the swing on her front porch, rocking slowly back and forth, back and forth, wondering when we’d leave. I didn’t complain much while we were at my grandma’s house, partly because I didn’t want to hurt my dad’s feelings, partly because I felt obliged to spend some time with her.
I have memories from when I was younger of walking with my grandmother, down to the corner store. We always had to walk slowly, my grandmother taking small steps as if she was the child, not I. We’d look around, I’d point out pretty flowers growing up through cracks in the side walk and she’d nod and smile.
As I grew older and my grandmother with me, the walks stopped. She was no longer hobbling around the kitchen baking ginger snaps when I would arrive, she would be lying on the couch watching TV that I was sure she couldn’t hear.
My grandmother suffered from depression, that I’m sure of. In the last few years of her life she changed. She’d been battling cancer for a long time, but I don’t think that’s what did it. I think more than anything it was her cataracts that started her depression. She’d always loved to read, and when she develloped cataracts she couldn’t anymore. I can’t imagine what it must have been like, to sit in her house, with nothing to do but stare at her old TV, which had 3 channels and was always fuzzy. They got her cataracts fixed but I think by that time she was too far gone, too sad and lonely.
The last time we visited her before she died I sat on the couch with her. We were doing a criptoquote together, a puzzle in the paper I’d never been able to complete. After a while she grew tired and the paper lay limp in her lap. She stared off into space for a while, her hand on my knee. I didn’t say anything, I didn’t know what to, I never knew what to say to her. After a long time she said, “I’m not a very good grammie, am I? I don’t even bake you cookies anymore.” She turned her head to look at me, her scalp showing through her thin grey hair, her eyes watery.
It could have been a definitive moment. I could have said something truly meaningful and deep. Something to set her little old heart to rest. Instead I said the only thing I could think to,
“Oh, no grammie, it’s alright.” That was true, I didn’t expect her to be making me cookies, she was sick and old. But the words sounded empty anyway. She sighed a little and patted my knee. Turning her head away from me she looked out the window into the gray morning.
3 months later my grandmother died. My dad was with her and we got the phone call early in the morning. I sat in bed with my mom after, both our eyes dry. It was something we’d been expecting for so long. It was almost a relief. She had been so worried and scared, I think she was afraid of dying for a long time. I did cry aferwards, by myself, but almost more from obligation. I was younger and I hadn’t had anyone very close to me die before. I felt I had to cry, because that was you did when someone died, you were supposed to be sad.
I still think of my grandmother, she used to be a painter and we have a few of her works around the house. Doing crypt-o-quotes I often think of her, sitting on the couch under the blanket she crocheted herself.Crypt-o-quotes are hard. I don’t usually manage to finish them, but I try.
I don’t remember the last time I saw my grandmother, all my memories of her meld together. I have some memories from when her husband was alive, them sitting on the swing on her porch step. Mostly of her in her rocking chair in the kitchen, her arms outstretched for a final hug and kiss, a good-bye. 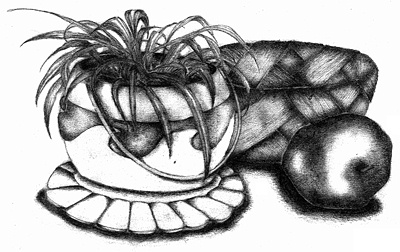