Pride of a Band Geek

As the band takes the field on Fridays at halftime, the field commander raises his hands, and the stadium lights give his white gloves a radiant glow. The field falls quiet, a gentle breeze blows across the field with the scents of dirt and grass, and the band remains still. The conductor’s sharp whistle blasts cut through the silence to signal the beginning of the song. I am a band geek.

To prepare for football season beginning in August, the band meets five days a week to prepare for the season and rehearse marching fundamentals. In the heat of summer, sweat drips from my face, burns my eyes, and drenches my clothing. We spend one or two weeks leading up to a home game learning music, setting drill, and polishing up the entire show, so the show on Friday night can be the best halftime performance of the season. At practice during the week, the entire band goes outside to run the show repeatedly to make it perfect. By the end of the season, the temperatures drop below freezing. When most people have started wearing coats, I still prefer to have nothing but a t-shirt and jeans for marching. Regardless of the temperature, I don’t get cold once the blood is pumping hard during the shows.

Each Friday reminds me of the anticipation of the performance that I had the first Friday of football of my freshman year. In my third year of marching, I still think, ‘I will give it my all, and the end result is insignificant.’ As we march out to the field to set for pregame, the adrenaline in my system is amplified immensely by the time we are preparing to march onto the field. Each time I prepare for a performance, I tell myself, ‘This must be the best show ever.’

By halftime, the adrenaline has subsided, and its effects are no longer existent. With two or three minutes left in the second quarter, the director shouts, “Get ready. Go wait on the track,” and my heart pumps wildly. When on the track, the brass of my alto saxophone is cold to the touch; my reed is dry, and the keys are stiff. To moisten my reed, I hold it on my tongue. This helps it sound better and prevents it from cracking down the center. I hold my saxophone up to my lips and blow warm air through the sax to improve the response time of the keys and tone. While I do this, I quickly move my keys to free them from their nearly fixed positions. After all of the practice that we put into the show, I know that the show will turn out great. When the visiting band has finished its performance, we take the field. Generally, the lights on the field are bright, and when I performed in my first halftime show, the lights seemed like they were the sun. We march on the field to the cadence; the bright lights shine on us from all around, and the crowd gazes at us. On command we bring our instruments to the ready position, and while we play, my mind shouts, “Left. Two. Three. Four.” The best feeling of the night is the applause of the crowd, but the rest of the show remains. When we finish our show, we march off the field as we marched on, and we make our way back to the stands.

Most of the other band members and I have fun at the games because we are able to spend time with friends who have a common set of interests. When we perform well, I never want it to end. Sadly, it must come to an end eventually. I am a band geek, and I am proud of it. 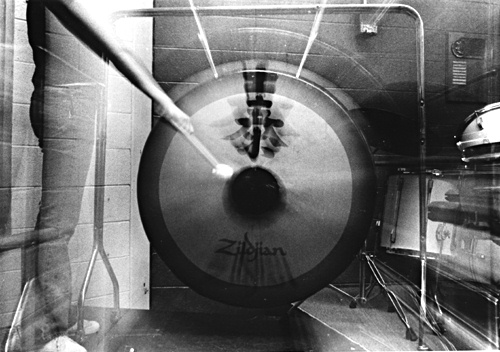