It was a cold day in the middle of January. The snow in my grandma’s yard glistened like diamonds and the frozen pond looked like a hockey rink. I was eight years old with my blond hair in pigtails. I wore a purple-striped shirt and purple corduroy pants. My overprotective black lab, Bear, was like an accessory, attached to my hip.

I wanted to learn to ice skate so I could be a hockey player. I didn’t own a pair of skates but I was determined and decided I could learn in my tennis shoes. Bear and I made our way down the hill to the pond. I threw a large rock onto the ice to see if it was thick enough to hold our weight. Bear took off across the top, erasing any doubts from my mind. That dog was bigger than a house, so if the ice could hold him, I wouldn’t be a problem.

I walked across the ice and gradually confidence replaced fear. I started skating, moving my feet and gliding like a swan. While doing figure eights around my dog, snow started to fall. The flakes were light, like feathers falling from an angel in Heaven.

Bear chased me around the pond as I pretended to be a Red Wing. I found a branch for my hockey stick and a small rock for the puck. Bear was the Avalanche I was going to defeat with a shut out.

Then I came upon a hole. It wasn’t just any hole, it was a magical hole that hypnotized me. It was pitch black, darker than anything I’d ever seen. Inside were small fish, not the normal bass you would find in that pond, but mini goldfish and red fish like fire flames.

Looking into this hole, I felt a pull and inched my way to the edge. Then, for some dumb reason, I walked right into it. The second my body felt the ice-cold water, reality hit. My lungs felt like they were shorting out. I gasped and tried to scream for help but no sound escaped my frozen lips.

As I scraped my nails on the ice trying to pull myself out, a large black figure appeared. I grabbed it and kicked my legs, trying to find the other edge to push out. The figure was soft and used all its effort to drag me. I knew it was Bear. Once I was out, he herded me toward the shore.

Bear was my treasured protector. The saddest day of my life was July 28, 2004. Bear swam into the very pond where he had saved me and had a stroke that left him helpless in almost the same spot he pulled me from. I wasn’t there to return the favor and save him, but my Grammi jumped in and pulled him out so we could properly bury him. 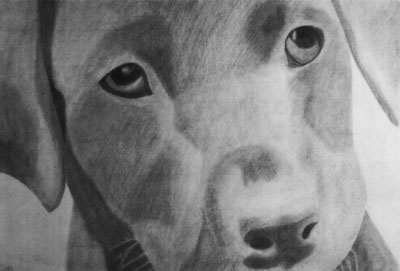 Favorite Quote:
\"why take life seriously, none of us make it out alive anyway\"
\"censorship is like telling a man he cant have a steak because a baby cant chew it\"--Mark Twain

good story you dont find many dogs that loyal