Baseball Throughout My LIfe | Teen Ink

Baseball Throughout My LIfe

Baseball throughout my life

As we walked out to the backyard you could smell the fresh air as it overwhelmed your lungs. The grass was as green as it could be. There is a lonely tree in the far right corner that doesn’t seem to get enough light. There is a dead patch of grass near the stump of the tree. Bases that belong to a baseball field are lined up in the grass to mimic a baseball field. My dad is outside painting foul lines from home plate to first and third. The smell of spray paint taking over the fresh air. The white lines that go along with the bases make it seem as if there is a baseball field in my backyard.

You have been with me since I was 3 years old. You started out with me when I would play catch with my dad in the backyard. We would throw the ball endlessly through the air. The white ball with red laces would spin as we threw it back and forth.You could hear the laces wizz through the wind. When the ball would land in the glove, you could hear a loud pop. It’s the greatest sound in the world.

He was a middle-aged man, about 30. He walks out into the backyard with a glove that is older than him. He wore old jeans that have been worn so much, the bottom of them are starting to get torn from being walked on. His shirt was as black as the night sky and had a little silver nike swoosh in the corner. He has a smile that was contagious to everyone who saw it.

The first big moment I had was making the all star team. With the tear still on the bottom of is jeans, my dad came home on a humid summer night after the baseball season had ended. He came in the the big smile he always had and I knew there was good news waiting for me. He sat down with my mom as she had the most subtle black eyeliner on that made her eyes sparkle in the light. My dad elaborate exclaims, “You were picked to be on the all star team”. I remember those words as if he said them yesterday. My mom’s face blew up with happiness. She leaped out of her chair and dashed to me and gave me an enormous hug. We were all very happy but soon everyone calmed down with just the smiles on their faces.

The very next baseball season I starting playing travel baseball with this all star team. I played with them until I was 12. I was asked to play with a team for a couple tournaments. One of the tournaments was Cooperstown, the biggest tournament I’ve ever played in at this point. The tournament consisted of 104 teams; most Major League players have played in this tournament, and my team placed second. As we moved through the tournament, we couldn’t lose. During the bracket play at the end of the tournament, there were several good teams we had to play. We beat every team by at least 3 runs until the semi-finals. We were playing the Michigan Muskies. It was the bottom of the 6th inning and the bases were loaded when I was up, it was a 3-2 count and my team was down 3. I knew I had to swing at anything close. I knew the fence was 200 feet away. All I had to do was get under the ball just enough to put it out and give us the lead by 1. The Pitcher threw the ball and I recognized what pitch it was right away. I closed my eyes and swung as hard as I could, hoping I could hit a grand slam to go ahead. I hit the ball with just enough force to put the ball out. We ended up winning that game and losing in the finals.

I then went on to high school and made JV as a Freshman. By the last 10 games of my Freshman year I got pulled up to Varsity, I was on top of the world. I started about 9 of the 10 games, including districts. We lost in district finals that year, but I was so happy because I was a 14 year old Freshman playing against 18 year old Seniors. My sophomore year I played Varsity and still loved the game. At the end of the summer, right before my Junior year, I was playing in Columbus and I had the best conversation with my coach ever. He told me there was a college looking at me. The college was Akron, a Division 1 school. I knew this game was going to be the biggest of my summer. I played super well and remember everything about it. I hit a triple and a single. In the field I turned a double play and had a normal put out to first. After the game I was told to call the coach. During the call, he invited to a camp; after the camp I was offered a scholarship.

Baseball has given me so many opportunities in life. I have made life long friends with coaches and teammates. It has also made me into the person I am today. From the all star team, to cooperstown, to getting my first scholarship. Baseball has been the biggest part of my life for over 10 years and I wouldn’t change anything about it. 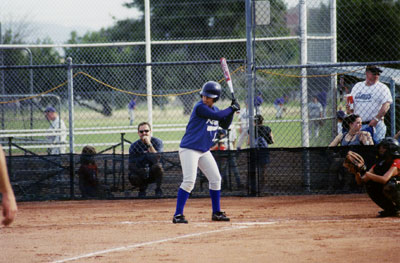