It was time for the nerves to start; the beginning of the softball season was right around the corner. “All softball players please meet in room A 206 for a brief meeting.” We all wondered what we could be called down for. Once we got there she explained to us that she was not going to be coaching this year. As a result, our JV coach was going to be moved up to Varsity to fill her spot. A couple of different emotions filled the room. We were told who the new coach was going to be. We only knew her as a very old-schooled basketball coach, so we didn’t know how she would be as a softball coach. Our assistant coach had only been involved with volleyball and we didn’t think she knew anything about softball either.

At the second practice I was introduced to the new coach, [comma splice] the assistant coach hadn’t been there but I already knew her. My first impression of her was that she was just very different from what we knew and I was worried that it was going to be a rough season, especially for us sophomores. We all compared her all of the time to our old coach and how she was going to be worse.

She would always yell at us when we would make a mistake instead of helping us figure out why we messed up and how to fix it. A lot of people on the team, including me, grew into always having a lot of anger and frustration when it came to trying to understand why she did the things she did.

At our practices we would always do the same fielding drill for the full 2 hours, instead of working on other drills or even working on batting. It may have helped but it would make me so infuriated because I would throw the hardest and fastest and she would yell at me. “Aubrey throw faster”[punctuation error] , “Aubrey throw harder I know you can”, when I thought I was doing everything right, and I was throwing with all I could.

We had been doing the drill for what felt like forever and eventually I had to stop throwing.

“Coach I can’t throw anymore.” She came over to me and asked me what was wrong. I told her my arm hurt everytime I threw the ball. She told me to turn around and she took my arm and started pushing around on my shoulder. At this point I could have turned around easily and screamed in her face but I had to bite my tongue. She found what she thought was a knot, so she stood there pushing on that spot and digging her thumb into my shoulder blade, at this point I probably had a bruise from where she was pushing so hard. She held the spot that was hurting and I stood there in pain while I was telling her to stop, [comma splice]  she told me she had to work the knot. She then told me to just go see the trainer.

I sat in the dug-out the rest of practice, [punctuation error] because my coach told me I needed to rest my arm for our game that week. I didn’t want to talk to anybody at this point because I would have just exploded with anger. All of the strength it was taking to hold in my anger made me cry. I just wanted to leave and never come back to her team. I sat with my jaw clenched hands together and staring at the ground. The other girls in the dug-out asked me what was wrong and I couldn’t hold it in anymore and just spilled out everything I was thinking.

One time we mercied a team by 20 points and she said to us “That team shouldn’t have scored anything at all”[punctuation error] . At practice the next day we did a drill that we had to do 25 sprints for. Every single time after the drill if some didn’t field the ball clean, she would make us do sprints. “That’s 5 more sprints down and back,'' said coach,[punctuation error] “Oh my god, what is the point of this,” we all questioned. This didn’t help at all except make everyone so mad that they didn’t even want to be there anymore.

I understand now she wanted us to be the absolute best we can be by pushing us, but she did it in a way that was different than what we knew. We didn't realize at the time because we all just wanted to be angry at the change, we just wanted our old coach back.

At the end of the season I was finally getting used to the way she did things. Now I won’t even have her as a coach this year, but it made me look at things a lot differently. That season was a lot different than my first year playing. The coaching made the season a lot to handle. It tested our ability to brush things off and just play the game and have fun. 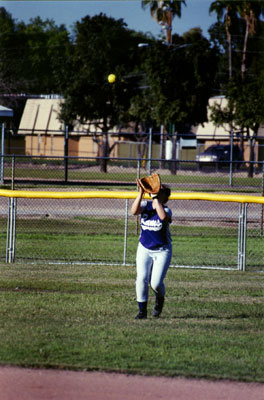