It's been a grueling game - we played the longest 90minutes of the entire season - and now our soccer team is in overtime of thenational championships.

The game started slowly and calmly, but quicklypicked up. Adrenaline started to pump and aggression started to flow. We werepassing and kicking, diving and shooting. Standing in the goal, I witnessed thewhole game.

At the end of the first half, the score was tied up 0-0. Bothteams came out strong in the second half, looking for a goal. This game was allabout the goalies. The other goalie and I made 40 saves combined. We were bothtired and wanted the game to end, but we saw the inevitable approaching.

Overtime - another 20 minutes of heart-pounding, nonstop action. In a wayI'm happy because we're still in the game, but I'm not sure if my body can takeit. This is what we trained for all season, though, and now it's time to separatethe men from the boys. I hope someone scores so we don't have to go into penaltykicks.

After ten minutes there's still no score. My legs are screamingwith pain. We start the second ten minutes. All I can think is how much I don'twant to go to penalty kicks, truly a goalie's worst nightmare. A point-blank shotfrom a mere 12 yards away is, in most cases, impossible to stop.

Bothteams are tired, bodies drenched with sweat. I glance at the clock - 30 secondsto go. As I watch the seconds disappear, I know what lies ahead. Five shots foreach team. Whoever has the most goals wins.

Our team wins the coin tossand elects to shoot first. Our first man steps up and laces a shot in the cornerof the net. This takes a little pressure off me. Their first man steps up, and Imake a diving save to my right. Our second guy steps up and sinks a shot just tothe left of the goal post. Their second guy steps up and burns a shot into theupper corner. All I can do is make an attempt and pick the ball up out of theback of the net. Our third guy steps up, but he puts the ball right into thegoalie's hands. It is 1-1 at this point.

The other team's third guyapproaches and hits a clean ball to the corner. With a lunging attempt, I manageto get one hand on the ball and carry it around the post. I can hardly breathe.Our fourth guy steps up and nails the post. We all watch his head drop andrealize how disappointed he is. I get ready for their fourth shot, but the guykicks the ball over the goal.

Now it's down to the wire. Our final playersteps up, and we can see his knees shaking. He approaches the ball and slices itinto the corner. We have the lead, but must keep it to win and they still haveone shot. As I set up for the shot I stare the shooter in the eyes, doing my bestto intimidate him. The referee blows the whistle. I'm hoping the shooter doesn'tchoose the upper right. I've had problems with that corner all year. I know howimportant this is, though. It is up to me. He runs toward the ball and, sureenough, it's headed for the upper right.

It all happens in slowmotion. I take one step and launch my body into the air. I feel like I am flyingin the goal. My body fully stretched, I can feel my skin burning from beingpushed to its limits. I feel my fingertips on the ball, and then more of my hand.I know I've touched it solidly.

The next thing I know I am on theground. My whole team is on top of me and the crowd is going wild. I saved it! Ican't believe it - our team is the national champion.

After cheering andcelebrating, we accept the trophy and get on the bus for our eight-hour ridehome. To this day, I have a picture of that save hanging in my room. Whenever Ihave a problem, I look at that and know I can do anything I want as long as Itry. 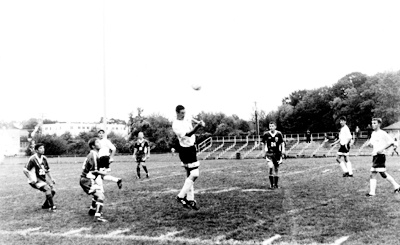