Both sides of the stadium are packed, screaming and shaking milk-jugs decorated with ribbon and filled with rice or beads or something else that rattles incessantly. They start to empty, though; people go to piss and stuff their faces now that they won’t miss a second of football. Because wouldn’t that just be terrible? Missing out on seeing high school boys stand around then tackle each other?

There’s one group that is silent. They aren’t fidgeting or waiting on their food. They aren’t talking about the score or the referees or how outrageous it is that a seventeen year old messed up. They are the band. They stand silently on the back sideline, eyes glued to the ground. One hand clenches an instrument—once so mystical and mysterious but now as common as a ball-point pen. The other hand is pressed against the small of the back. Fingers curl and uncurl, a tiny contraband movement.

A whistle rings out from the front sideline. It’s game time. The band responds as one: feet together, horns in carry position, heads up, chins above parallel. The drums tap out a command and they’re off, feet rolling across slick plastic grass. Dut. Dut. Dududut. Two three four. Dut. Dut. Dududut. The snare is hypnotizing, simple and repetitive. The tapping soon changes, though. The simple quarter notes multiply and transform into a complex rhythm; every person on that field sings along in their head, counting the beats until they slam their foot into the ground one last time.

One person wears a different uniform. Her hands fly out and up into a salute. No one cheers as she runs off the field and scrambles up her rickety podium. Her arms stretch out in front of her, trembling slightly. She screams out the command, hands cutting through air. And the show begins.

The crowd may just want football to come back, but this is halftime.

The drums pound out their beat, barely pretending to follow the actual tempo. The drum major glares at them before adjusting. The winds move in every direction, but their shoulders stay parallel to the sideline. Backs twist in contortionist ways.

You can almost see them counting in their heads. To eight and eight again. Then change directions, wrenching hips and feet one-eighty degrees without letting shoulders move an inch from that sideline. Count to eight, them four. Up up up up comes next and sound explodes across the field. Instruments pressed against faces, fingers pressed against instruments, pushed against the keys as notes ring out and die and skip across runs and scales.

A shape is made and then twists into something completely different. Lines become curves become diagonals become yet more lines. Squares warp into rectangles and circles that turn and spin.

Then the music stops and feet come together one last time. The drum major, high on her silver platform, turns and salutes the disinterested crowd. A smattering of applause comes this time, mostly from parents and ex-boyfriends.

Dut. Dut. Dududut. The tapping comes back. Curves and angles fold into a single line that pushes across the sideline, forces its way through oblivious crowds.
As they settle into their bleachers, tucked away behind the end zone, massive applause rings out. The football team has run out from their locker rooms and that causes thunderous excitement. Because that is what truly matters here: not the magic of a performance, not even teamwork and dedication. Burly teenagers fighting over a ball. 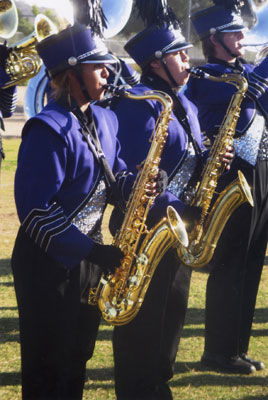 The author's comments:
I've been in marching band for five years and have experienced every high and low you can imagine. There is nothing worse than giving what you truly believe to be a great performance and for even the crickets to ignore you. This piece was inspired by moments like that.
Post a comment
Submit your own

Armor GOLD said...
on Nov. 29 2013 at 11:12 pm
Armor GOLD, Windsor, Connecticut
14 articles 0 photos 7 comments
View profile
Simply put this is beautiful. Thankyou, its things like this which remind me the power of words.