I have had many great memories of playing basketball in elementary and junior high school, but there is one experience that I had which I will remember as an example that you should not be afraid to take chances, because you never know how things will work out if you are afraid to take a chance.

The experience I had was trying out for an AAU basketball team when I was in the fourth grade.  I did not know any of the girls that I was trying out against.  To be honest, when my Dad and I got to the try-outs, I didn’t want to even get out of our car, but my Dad just told me “nothing ventured, nothing gained”, and that the best way to live my life is to not be afraid to take chances.

Part of the reason I was scared was that my fourth grade travel team from Milford played Newton in a Metrowest basketball team and got creamed.  It wasn’t even a close game.  We barely scored a few points and Newton scored dozens of points.  They were much better and more experienced than us.
It wasn’t any better when I got in the gym.  There were probably forty girls trying out for twenty spots total on two teams.  I could tell by the groups of girls in the tryouts that almost all of the girls knew at least a few of the other girls trying out.  I was the exception as I didn’t know anyone.

After stretching, the coaches had us run through drills, and then scrimmages.  I did pretty well in the drills and then I played well in the scrimmage.  In the following week tryout I felt even more comfortable.  I even got to know a few of the girls in the tryout, at least to smile and say hello.

The week after that, my parents got an e-mail that I made one of the teams!  I had a lot of fun playing with girls from the other towns and playing in different gyms around Massachusetts.  Even though I only played one year with that team, I am glad that I did play that year.

Trying out for that team also taught me a lot of life lessons in facing a fear of the unknown.  First of all, we should all be willing to try new things, even if we don’t know how they are going to turn out.  I found that you shouldn’t be afraid of challenges if it is something that you really want to do, you should just go for it.

I only played one year for that Newton team.  It sometimes took an hour to get to practice with the traffic, and I found that I liked playing softball in the spring more than I liked playing basketball.  However, I still know that I would have regretted it if I hadn’t tried out for that team like I did.  The only way I would have known the answer to the question if I would have liked playing on the team was to take the chance and try out for it. 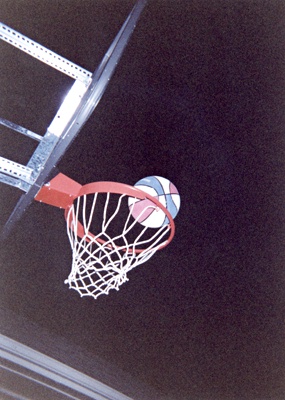