You can be right up and staring someone in the face without crossing a line, without breaking a bubble or saying a word. I've gotten real good at standing at a bus stop for 10 minute intervals without saying a word, staring at an indiscriminate space across the road and steadfastly ignoring the silence. Because once broken, silence roars in your ears and wears against resistance. So if you talk, you better have a conversation mapped out or an exit route planned.

A casual observer might think that once on the bus, squished hip to hip with another human being, that you would have to interact, that the awkwardness would become too great. The divine answer to this, my friends, is the iPod. Only God must want me to suffer, because I don't have music flowing into my ear twenty-four/seven. So I squeeze into a seat and listen to the bass notes leaking from the guy next to me. Bus rides are no longer loud, because everyone is plugged in and boxed up, fascinated by the ubiquitous signs of human existence parading past the window.

Again, our casual observer would insist that surely, once you get to school and the earphones come out, you must interact. This is why humans have cultivated friends. Here is safety, and predictable topics, a haven from the awkwardness of being alone and vulnerable to the forays of stranger's conversation. The bus empties, everyone filing out to join the chaos outside. Clothes and interests and the complex formula for cool match people up - a homing device that draws them into groups.

High school is all about feeling the lines; toeing them, nudging them, and then all out running when you've got a goal. But how do you meaningfully cross lines in a non-responsive culture, when comfort is the ultimate goal? Saying hello is two flights and a bus route from the border between “us and them.” And without small talk as a visa, how are you supposed to cross the line into a legitimately different human experience? 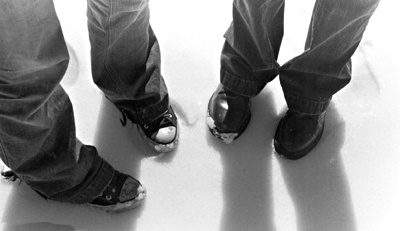