The time that I stayed in Zhengzhou was not long but, since childhood, I have always been fascinated with its historical vestiges and breathtaking scenery. Thus, I claim it as one of my hometowns. Whenever I return there to visit relatives, I roam the ancient footsteps to study and absorb its heritage. Last summer, I again flew to this hometown. The story of my voyage opens its page on the dike of the Yellow River.

In the museum near the dike, I discover a stone-grinding pan approximately a foot in diameter. It is the tool that the people of 8,000 years ago used for scraping the shell of sorghums. Today, the pan appears clumsy and rough, but as a remnant of the Neolithic age, it symbolizes the time when humans ceased their itinerant lifestyle. It also reminds me of the adversities and constant challenges in the process of human civilization.

Traveling west for an hour, I arrive at Mount Song’s King Dharma Temple. To the east, I see two mountain peaks facing each other, the Lofty Gates. Every August 15, during the traditional Chinese Moon Festival, the moon, resembling a silver plate, ascends to the rounded gate. It arrives in the middle of the two peaks and resembles a framed mirror. Since ancient days, people from all over have arrived with lanterns and delicacies to admire the moon and discuss poetry. I’ve never witnessed this event but sitting in the temple’s hall, while no shadow remains in the mountains and a breeze softly swings tree limbs, I feel a poetic surge. I record the emotions, which I later transform into a poem.

One whole day flies by. In a blink, the sun flips over its belly. I then direct my steps back home. I shall never forget this day’s journey. The Yellow River and the Lofty Gates have taught me about my ancient culture and have bled with my ancestors’ blood. By understanding the paths of my ancestors, I learn to choose the correct paths to my future. These ancient remnants have given me a culture with which I can strongly identify, allowing me to discover myself. 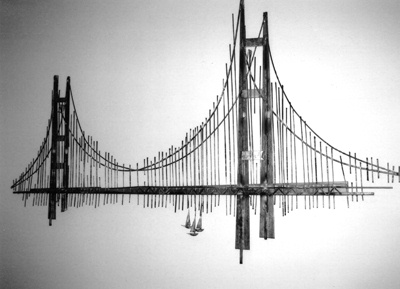