Every generation a band comes along that influences an entire generation of young musicians. From The Beatles to Nirvana, these legends are truly in a league of their own, with music that is at once so simply constructed yet at the same time artistically groomed to perfection. Pop-punk super stars blink-182 are not one of these bands. The trio has influenced countless teens and bands, but by no means are they musical prodigies in line with Kurt Cobain or John Lennon. But somewhere between the crude lyrics and the less than perfect singing is the magic that continues to draw in listeners young and old.


Perhaps singer and guitarist Tom Delonge can describe blink-182’s success best. “I think it’s been really big that we are a band that kids can relate to. We write about stuff that every kid knows. But it was almost as important to make people laugh. At the end of Buddha we spent more time getting our joke songs right than the other songs…But we still got the other songs done”. Despite their discography including album titles like Enema of the State and Take Off Your Pants and Jacket, blink-182’s immature sense of humor consistently takes a backstage to the band’s favorite subjects: growing up and falling in love. America, in turn, fell in love with the trio, but the band never intended to become the icons that they have, according to bassist and vocalist Mark Hoppus. “blink-182 has never really had any goals. We wanted to make it, we wanted to get big if we could, get played on the radio, make videos, do all that. But our one goal really was to write good songs, to be a good band, and if people come to the shows, cool, if people buy the albums, good. We just want to still be writing songs that keep us around a little bit longer”.


After years of touring and recording, the band needed a break. In 2005, blink-182 officially went on an indefinite hiatus. But that did not stop the members from making music on their own. Tom Delonge formed Angels &amp; Airwaves with his high school friend David Kennedy, while Mark Hoppus and blink-182 drummer Travis Barker formed +44. Even though both of the new bands were successful in their own right, there was still a future for blink-182. After Travis Barker’s near fatal plane crash in 2008, the band reunited at the 51st Annual Grammy Awards.

The band has a big year ahead of them, as they begin recording their comeback album and continue their world tour. The always ambitious Tom Delonge does not plan on being out of the limelight for too long. While recording the next blink-182 album, the gang has opted to record a documentary about their reunion. Aptly titled “The Blinkumentary”, the film is being produced with the help of film company HNDSMRNDSM.

The music blink-182 plays may not be considered timeless per se, but it is a window back to childhood for many contemporary punk rock bands. And as their once teenage fans enter adulthood and begin families of their own, it would not be surprising to see a father and son singing along to anecdotal lyrics about being dumped or being abducted and probed by extra terrestrials. 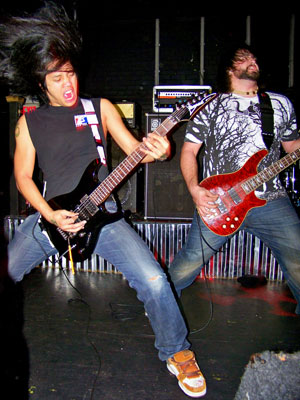 The author's comments:
Don't be afraid to support the bands you love! This was written up as a piece for school.
Post a comment
Submit your own