The largest city in the world without automobiles, Fes, Morocco, is alive with the sounds of the medieval era. Donkeys beat their hooves against the cobbled streets, merchants yell out the prices of their wares, and the booming voice of the call to prayer summons the faithful to mosques. The roads of Fes have never been charted or mapped – the sweeping turns, abrupt dead-ends, and secretive residents confusing any cartographer who tries. The deeper the road heading into the city, the further back in history they seem to go. Cellular phones being sold at shops here are beautiful pieces of parchment and fountain pens resting upon the shelves of centuries-old stores.

Visiting Fes last summer, I made it a goal every day to get as lost as possible in the streets and shops of the old city. A purposeful wrong turn down a alleyway leads to a glorious wedding concealed by the primeval walls, witnessed only by the stars and the moon. A purchase at a family-owned rug shop winds to a passage into the bowels of the city, where foot-wide bridges stand as the only means of crossing a swirling canal, to where the buildings shrink into the ground, crumbling, exposing families silently praying, guided by morals, not money.

Fes hypnotized me as I seemed to travel back in time, relishing one of the last medieval and cultural havens of the world. It has the ability to make every turn, every wrong move, a new adventure into the unknown, into a ­secret way of life known and preserved by its residents. 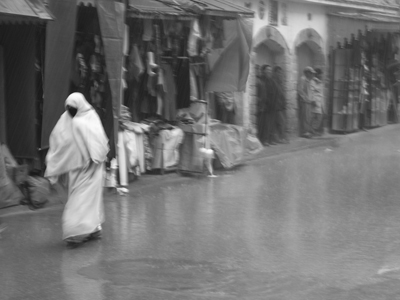 The author's comments:
Just a short narrative about my favorite city in the whole world: Fes, Morocco
Post a comment
Submit your own