Seven million vertebrateanimals are killed every year for dissection in American classrooms. Andfor what purpose? What gains are made when students cut open and explorethe anatomy of cats and frogs, pigs and dogfish sharks?

TheHumane Society of the United States (HSUS) believes whatever benefitsmight come from dissections are far outweighed by the associated costs.

The methods used by biological supply companies to prepareanimals for dissection cause tremendous suffering. The industry islargely unreglated and undercover investigations by animal rightsorganizations have consistently revealed cruel (and sometimes illegal)activity. Supply houses, for example, have blatantly violated lawsregarding transportation and housing of animals.

In one case twoanimal dealers in Iowa were charged with a staggering 1,600 violationsof the Animal Welfare Act. Others include one investigator who observeda biological supply company and wrote, "When they arrive,frightened cats come face to face with a worker who jabs at them with ametal hook, forcing them from two or three already cramped crates intoone. Then it's on to the gas chamber. Many are still alive when workerspump formaldehyde into them. They are then stored, packaged andshipped to schools all over the country."

Aside from the brutaltreatment of animals, there are other issues. A principal goal of lifescience education is to teach respect for life. Dissection is a violentexercise; it involves killing, preserving, cutting apart and thendiscarding an animal. Serial killer Jeffrey Dahmer attributed hisfascination with murder and mutilation to dissections he performed inthe classroom.

Dissections are wreaking environmental havoc, too.Frog populations are being depleted, and the chemicals used affect thehealth of both teachers and students.

As for the educationalvalue of dissection, it is overrated. Many studies have shown thatstudents who dissect score no better on tests than students who do not.In fact, students using high-tech methods such as interactive computerdemonstrations scored higher than those who dissected. One excellentprogram is "The Digital Frog," a very effective, educational toolthat uses electronic frog dissection to teach biology. It incorporatesthe full spectrum of multimedia technologies: video, animation, sound,narration, in-depth text, color photographs and a comprehensive workbookin one package. Students of all levels can use it, and it sells forabout 40 dollars.

There are alternatives for every species usedin dissections, not just frogs. Models (which show the animal's insidesmore clearly than the real thing), videotapes, books and card sets areall excellent anatomy and biology learning tools.

With all thesuffering in the world, should we really add to it with our educationalprograms? Is there any justification for animal dissection when it hasso many counts - animal deaths and suffering, mediocre educational meritand environmental disruption - against it? I think not. Like the greatAlbert Schweitzer once said, "Until he extends the circle ofcompassion to all living creatures, man himself will not find peace." 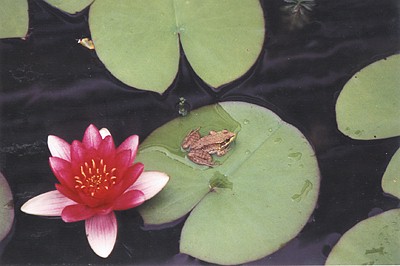