Has high tech really reached a new low? The average teenager sends more than 3,339 texts per month. We all know how easy it is to flip open your phone and type a quick “meet me @ the mall @ 2 plz!” to your BFF. But is texting as harmful and destructive to grammar as teachers claim? Will texting cause – OMG – the death of the English language? Despite popular belief, texting isn't creating a generation of illiterate teenagers. In fact, it's doing just the opposite.

According to recent studies by researchers at Coventry University and the University of Toronto, texting actually improves literacy. The studies found that texting had no detrimental link with linguistic development, and that it improved comprehension and reading development. The 10-year study, which tested 88 eight- to 10-year-olds, found that those who were better at understanding and creating text abbreviations did better on literacy tests. This “boost” effect is similar to what happens when parents talk to infants or read to toddlers; the more exposure children have to language, the more understanding of the language they have. In the case of texting, in order to comprehend shorthand abbreviations, teenagers have to have a strong sense of the longhand behind it. “What we think of as misspellings don't really break the rules of language, and children have a sophisticated understanding of the appropriate use of words,” states Dr. Beverley Plester, lead professor of the study.

This research is fueling supporters of texting by encouraging school boards to incorporate the use of texting within education. According to statistics, 54 percent of those who text are teenagers. Because it's such a huge part of a student's life, educational organizations are working to create a curriculum that involves this technology and engages both the attention and the interest of teenagers.

States such as Connecticut are beginning to see uses for this way of communicating, and are convinced that “nonstandard English” doesn't actually interfere with the ­development of the ability to write in standard forms required by school, higher education, and careers, as opponents claim. They believe that it helps motivate students and can be beneficial in a teaching environment by testing students' grammar and comprehension.

But these new findings are definitely overshadowed by public perceptions, shaped by the media, which is constantly unleashing stories of students using textisms in formal writing. In one well-known case, a 13-year-old girl handed in an essay written entirely in texting shorthand. As shocking as this may seem, it does not prove that the English language is disappearing. Dr. Plester's report states: “The alarm in the media is based on selected anecdotes, but actually when we look for examples of text-speak in essays, we don't seem to find very many.” This is due to the technique of code switching – knowing what type of behavior is appropriate in certain situations. One example of this is when teenagers switch from talking in slang with their friends to speaking politely to a teacher or parent. Slang is much like texting, and though there's the occasional slip-up, it doesn't happen often. Even more rare is the occurrence of texting shorthand in a formal piece of writing, and most critics believe that in the instances when text-speak appears in schoolwork, the student has usually done it on purpose.

When looked at from another angle, texting may not be damaging our language, but rather, building it. The English language has evolved over hundreds of years, and English from the Shakespearean times changed greatly to become modern-day English. Textese could be shaping the new and improved English language. It fosters creativity and, I believe, is not just an example of linguistic laziness. Like the clichés “all that glitters is not gold” and “star-crossed lovers” from Shakespeare's works, texting is inspiring new phrases, words, and symbols that are making their way into our culture, for example, “smh,” “ily,” and “g2g.”

Opponents of texting have also claimed that it causes grades to drop for many students, but it's not the physical action of texting that should be targeted; it's the addiction. Instead of paying attention to the teacher and the lesson, some students focus more on their phones hidden under their desks. One reason for this could be that teachers are not using good techniques to motivate and engage students during the class.

But this doesn't let the teen who write “LOL” in a term paper off the hook. Like any slang appearing in a formal research report, textese should be considered a grammatical error and rebuked with a red pen. It may be true that electronic communication has its own faults and fosters its own carelessness, but texting slang can be seen as no different from academic terms or journalistic shorthand in writing. And as for the texters, maybe they should consider typing out the whole word once in a while. It really doesn't take that much longer.

It's time to loosen up the English language and tolerate texting as a growing part of communication today. It may bend all the rules, but it is still 100 percent a part of this language and is fostering new innovation with words, all while improving the literacy of those who are heavily involved. Textese is the modern dialect of the world, it seems, and our society should accept it. That heathen Shakespeare would have been on board. 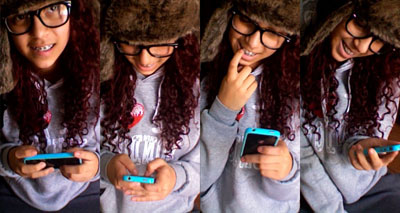