Is there such a thing as the perfect race? The 13-year-old twins who make up the singing duo Prussian Blue certainly think so.

Lynx and Lamb Gaede both have blond hair and blue eyes and just want “people to stay white.” They express these views through their racist lyrics, which are causing controversy. They also have had pictures taken wearing white t-shirts adorned with smiley-faces sporting Hitler mustaches.

The Gaede twins have been taught since birth to be white nationalists. Their home is full of the swastika symbol, from their father’s belt buckles to the brand for their livestock. They are home-schooled to avoid mingling with other races that aren’t “pure.”

One of their songs, “Sacrifice,” is a tribute to Nazi Rudolph Hess, Hitler’s sidekick, with lyrics including, “Rudolph Hess, man of peace. He wouldn’t give up and he wouldn’t cease, to give his loyalty to our cause. Remember him and give a pause.” The girls are also close friends with one-time Ku Klux Klan wizard, white supremacist David Duke.

When hurricanes Katrina and Wilma hit last fall, people all over the world sent money to victims and charities, including the Gaede family. The only difference was that they stipulated that their money could only be used to help white victims.

Who would ever expect such innocent-looking young girls to be so full of hatred? It seems almost impossible for parents to shield their children from other races, so how could Lynx and Lamb’s parents teach them to hate everyone except Americans with blond hair and blue eyes? Don’t most parents teach their children to be nice to everybody? The Gaedes actually just left Bakersfield, California because it wasn’t “white enough” and plan to move to an all-white community in the Pacific Northwest. Is this a good lesson to teach children - to be intolerant bigots?

Our country is very lucky to have many rights including freedom of speech, but I think Prussian Blue is taking this right too far. They are preaching racist opinions. Since they are preteens, they will probably have a preteen following, causing young girls, and possibly boys, to absorb their ignorant ideas.

These girls have been so sheltered that they have probably never even talked to anyone outside their race. How can they think white Americans are the only people who should be strong? Nobody should ever form an opinion about others unless they know them, and they shouldn’t make generalizations about entire races, that is just ignorant.

I strongly urge everyone to boycott the music of Prussian Blue. These girls are simply white supremacist bigots who haven’t even had the chance to experience the world around them. Not only do their lyrics promote horrific ideas, but they have two of the worst voices I have ever heard. It seems like they have never taken singing lessons and have the voices of toddlers trapped in the bodies of preteens with biased minds not very different from Adolf Hitler. I suppose they would consider that a compliment. 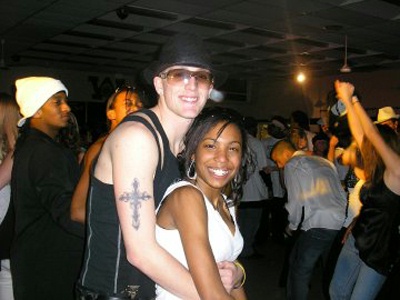 this sounds weird but I hate haters.

I agree with the article, I cannot believe that two girls could be so hateful. Their mother is obviously a bad parent, I mean, teaching her kids to be like this?

I WILL boycott Prussian Blue's music, their music SHOULD be boycotted.