Giving Thanks for What? | Teen Ink

Giving Thanks for What? MAG

About 100 people step off a boat. They find a ruined village and start to build a settlement on its outline. The people of the land welcome them, giving them food and information about how to survive. After a terrible winter, the remaining newcomers thank God that they have survived with the help of their hosts and have a big dinner, for which their hosts supply much of the food. As European diseases devastated the native population and killed entire villages, author Jackie Giuliano writes in his essay “Give Thanks - Un-Turkey Truths,” “the Pilgrims robbed graves, stole what they could find in abandoned Indian homes, and filled their larders with the harvest of a dying culture’s labors.”

In Virginia, in 1623 the English plan another day of celebration. James W. Loewen, author of Lies My Teacher Told Me, writes that the British “offered a toast ‘symbolizing eternal friendship,’ whereupon the chief, his family, advisors, and 200 followers dropped dead of poison.”

The turmoil that ensued seems a boon to the newcomers, as the populations of locals plummet from disease and wars for the next 300 years. Did they thank God for such a practical solution to the problem they faced? It’s not too hard to imagine that they did.

What should happen to these traitors, these people who took advantage of such hospitality, who committed atrocities on those who sustained them? Were they punished? No. In fact, they are revered today, and America has a national holiday in their honor.

Once a year, families gather around dining tables, usually segregated by age. The children, at a smaller, less fancy table, eagerly anticipate their graduation to the “big” table where they can participate in discussions about politics, the stock market and Auntie Jane’s facelift. At both tables, each member of the family proceeds to commit such acts of gluttony that would appall the conservative founders of the tradition. The simple dinner has been hyped by commercials for cranberry sauce, mashed potatoes and turkey run for weeks before the event. A tradition of family and love and acceptance has been initiated by greeting card companies and airlines.

The tables at which we celebrate The Day of Gluttony are decorated with fall leaves, cornucopias and figurines of Separatist Puritans, or Pilgrims, as we now call them. These little people may grace many tables in America, but certainly not those of Native Americans. Those tiny models, smiling at each other in peace, don’t have the stony faces of hate as did their historic counterparts. Today we exchange words of love for our family over these representations of hate. Such a juxtaposition of ideas cannot help but be noticed by Americans today, can it?

The Thanksgiving tradition is centered on a holiday that could logically be renamed “Day Celebrating the Death and Exploitation of Native American People.” Although we believe we are celebrating the glorious entry of our ancestors into the “Promised Land,” in our ignorance, we are also celebrating the collapse of indigenous America. The ugly part of our heritage has been covered up with fuzzy themes of love and peace. In our blatant ethnocentrism and ignorance, we have taken a day that commemorates the decimation of populations through disease and violence and turned it into a day of feasting and out-baking our sisters-in-law.

American traditions are full of hidden sorrows. Consider Columbus Day, a holiday celebrating the “discovery” of the New World. Our ignorance has hidden the malignity in this tradition, too: Columbus, believing that he had found Cathay, or China, immediately set about enslaving its residents. Our American mindsets celebrate the accomplishments of Columbus while ignoring that the underlying events of his discovery are terrifying. In our ignorance, we celebrate the macabre, we commemorate the gruesome, and we honor the abominable. Although people of our time would claim that ignorance is not something we have control of, it is far past time that America educated itself. 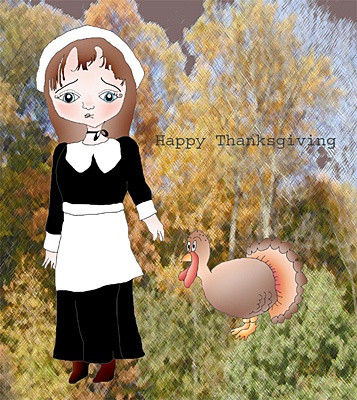 View profile
I entirely agree with you, yours is an opinion on American pride that I've held for a long time. Open any grade school text book on American history, and you'll find that nearly every story is sugar coated. The section on the Revolution portrays the British soldiers as evil, devil-worshipping murderers. Until the brave American army drove them from the land. But really, the war had no reason to even be, most settlers were fairly treated and only the rebel rousers of the settlement made it seem like every waking second under Britian's rule was an atrocity no moral man should stand for. Our country loves to toot its own horn whenever given the chance, to a point where many of our youth could be considered brainwashed. The story of Thanksgiving is a perfect example.
sam i am said...
on Jun. 13 2009 at 3:04 am
i very much admire your research on the subject and can see your clear opinion. i never quite understood why you had to have a big meal for the holiday. it is almost like they were not thanking God for what they had but for the opportunities and choices to come. they might have considered the destruction of the tribe just one of the choices they had been eager to see and thought it was in some way their right, after all their pain and suffering. their judgement was clouded by the awe and power of being free.