If someone were denied dressing a certain way because of the color of his or her skin, everyone would cry ‘racism.’ But apparently the same courtesy doesn’t extend to sexuality. America is supposed to be the land of the free, but people forget that it’s still far from equal. Whether discrimination is based on race, religion or sexuality, it’s still discrimination.
African Americans were once viewed as different and inferior; now it’s homosexuals who are viewed as “wrong.” There are those, of course, who fully support same-sex couples, who have gay friends they love no differently than straight friends. There are also many who want to deny gays rights in marriage and jobs, who view homosexuality as wrong or disgusting, who treat people differently because of their sexuality. Society is so hung up on “normal” gender roles that it doesn’t even occur to some that what is different isn’t necessarily wrong.
It isn’t just about what homosexuals are allowed to do. The struggle for equal rights in jobs and marriage is important, but as unjust as rules regulating homosexuals are, sometimes below-the-radar discrimination is worse. Many places ban discrimination based on sexuality. But people need to see that there’s another step: personal treatment.
Rumor is inevitable, especially in high school, and there’s often whispering speculation about who’s gay and who’s straight. But that doesn’t mean that it has to be some secret scandal—it’s just who someone is. Ridiculing guys for acting too feminine or spreading scathing gossip about girls who act too masculine is just plain nasty.
Some schools even go beyond gossiping and have official rules restricting student sexuality. When a homosexual girl in Mississippi chose to wear a tuxedo in her senior picture, her school refused to put the picture in the yearbook, claiming that only boys could wear tuxedos. The district policy of a school in Florida states that students have to dress “in keeping with their gender,” and they sent a boy home because he wanted to wear girls' clothes. This goes beyond simple dress codes—it’s trying to define who someone should be. Schools shouldn’t have the right to do that.
This carries over into adult lives with jobs and marriage. Some companies are hesitant to hire openly gay employees, and many people feel like they need to hide their sexuality to get a job. Most states define marriage as between a man and a woman. A mere nine states allow some sort of gay marriage or union. Not only does this deprive same-sex couples of benefits guaranteed to traditional couples, it promotes the idea that gay couples somehow aren’t worthy or official. And then there’s the infamous “don’t ask, don’t tell” policy of the U.S. military. Open persecution or abuse because of sexuality may not technically be allowed, but painful disrespect is still rampant. Gay rights activists are throwing themselves into reversing discriminatory policies. But more than that, something needs to be done about the way Americans treat those who are “different.”
It’s going to take a long time for everyone in the U.S., let alone the world, to accept gay people. Things that are different are scary. True, not all schools try to restrict students’ sexuality; some even have a Gay Straight Alliance— a progressive step for equality. The key is for these official steps to carry through to students’ attitudes and actions. Little things like respecting the GSA, not using ‘gay’ when you mean ‘stupid’ and not ridiculing guys for acting too feminine or girls for acting too masculine can make a huge difference. It’s really very simple. Treating everyone respectfully will make school easier for gay students and will move us closer to a better society for everyone. America can’t truly call itself the land of the free until it’s willing to accept all types of people for who they are— gay or straight. 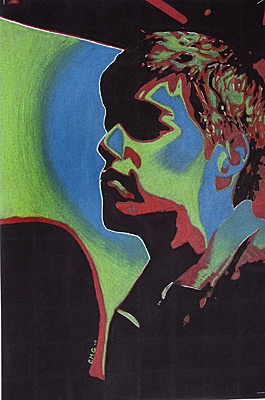 The author's comments:
I wish I could say I have some sort of deep, personal connection to this issue. But that would be a lie. I'm just a bystander. I may have friends who are gay- the fact that they aren't willing to open up about it illustrates exactly what I'm saying. Mostly, I just want to add my voice, give people who are a little different some consolation that somebody is on their side, maybe even make a difference. Hopefully, someone will listen.
Post a comment
Submit your own

endearingReceptacle said...
on Feb. 3 2015 at 10:12 am
i agree with this and that there are actually more sexual oreantations and genders than male female, gay straight, and gender is not the same as sex, sex is what your physical gender is, what youre born with, and there are two of those but many genders, gender is what you identify as, some examples are demi, agender, bigender, genderfluid, etc, etc. and some other sexual oreantations are bisexual pansexual, demisexual, etc, etc. i am unsure if you already knew this so if you did im sorry for wasting your time
elliebell SILVER said...
on Jun. 3 2014 at 6:30 pm
elliebell SILVER, Lewes, Other
6 articles 0 photos 6 comments

Favorite Quote:
"Too often we enjoy the comfort of opinon without the discomfort of thought." - John F. Kennedy

View profile
I totally agree, and I'm a Catholic. Speaking of which, funny story. I'm in Track, and we were watching a meet for the little kids from our school. They weren't using a pistol or whatever, b/c it would freak the kids out, so instead, the starters waved rainbow flags. This was very well-written, by the way.
Musicalartist said...
on Feb. 24 2012 at 9:18 pm
Musicalartist, Xxxxx, Other
0 articles 0 photos 144 comments
View profile
I totally agree with you!  And I am a catholic, one of the groups people say hate homosexuality.  So go GSA!
Lizzzzie said...
on Jun. 27 2011 at 1:08 pm
wow this was a breath taking article. I agree with you 100%! This unjust behavior based on a little fact about someone is just how the Holocast got started, and why Martin Luther King Jr. fought and did everything he did for us-- so everyone could be treated equal. And now???
swcricket98 GOLD said...
on Jun. 27 2011 at 12:30 am
swcricket98 GOLD, Williamson, Georgia
13 articles 17 photos 102 comments

View profile
I agree with the few comments on this article. The piece was well written, and you deifnitely got your point across in a non subjective way as to say a certain group hates gays (such as many people say ALL Christians do). I agree one hundred percent that homesexuality should be accepted in society as a part of humanity that will continue to happen thoughout eternity.
MadisonReneeJane GOLD said...
on Oct. 6 2010 at 5:23 pm
MadisonReneeJane GOLD, Norman, Oklahoma
12 articles 5 photos 22 comments

My brother openly says he hates gay people. I know so many guys who say they can't stand gay people or make fun of them all the time, and most of them are the popular and jocky guys. The ones everyone looks up to. They must feel the need to hate instead of accept because if they accept they might be called out on being gay, but if that's the case they just have to grow a pair and speak their real opinions.

I support gay rights and I accept homosexuality, but that doesn't mean I'm gay.

View profile
More people should read this. You're a very good writer.
QuestionAuthority said...
on Feb. 4 2010 at 8:44 pm
I 100% agree with everything you said and you are an excellent writer! I am definately adding this to my favorites.
Avalynn BRONZE said...
on Jan. 31 2010 at 3:49 pm
Avalynn BRONZE, Monrovia, California
4 articles 0 photos 26 comments
View profile
im so glad you wrote this piece! i think everyone should read this- its so true, fighting for gay rights is great, but we need to work on acceptance of homosexuality; it all starts with respect.