Life's a Joke, Might as Well Laugh | Teen Ink

Life's just a big joke if you really think about. Life's a joke because you are so hilariously bad at doing whatever you're supposed to do in life. People spend lifetimes attempting to find solace in something that will provide them with contentment. Although we might consciously fool ourselves at times that an object might make us happy, such a thought is almost always accompanied by an underlying pain that things might be the same way in the future -- what fragile paradise we have created such that our happiness is so inextricably tied to a few things. Just tell me an object, that by itself - on superficial face value - has given you some serious significant fulfillment. While many people may consider the inevitability of this aimless desperation as something to lament over, as an end-all-be-all outcome of life, I feel many fail to realize that such an outcome is only inevitable with such a pessimistic, bleak view of life. Bleak in the idea that there is something out there that could actually provide us with this elusive contentment and pessimistic in the idea that such a thing is forever out of our reach. When we dictate so strongly the rules of this game of life even before we make our first few moves, we create impossible victories, such that no matter the way we play, the last move invariably is a defeat. But we must ask ourselves who writes the rules of life? Is there a God up there in the sky carefully composing the minute details and the infractions. Perhaps its society at large that influences our decisions, subtly informing us of the infractions and penalties for disobeying the rules. Despite all the external influences presiding over us, I would argue that when it really boils down to it, the ability to draft our own set of rules is always our own. The decision to decide what makes us happy is uniquely ours because each of us has a unique distinction of what that means personally. Despite whatever preconceived notions we have of what obtaining happiness should entail, we will ultimately always come to realize, at some point in our lives, the validity of these ideas; we will always come to realize that we can never truly satisfy ourselves while grounding our sense of meaning to something external.

While I do not know what happiness means by any measure, from experience and from reading the great texts of Stoic Philosophers, I can confidently say what does not make me happy. This is not to say that happiness is attained through the complete avoidance of what makes unhappy, but that we should not fall into the age-old pitfall that there is some specific object or occupation that will give us the "happy-ever-after" life that we want. Rather, it is to say that it does not make me happy to have my unrealistic standards constantly battered down by reality. I would say that our path should begin by realizing that things will never turn out exactly how we want them, that no matter how hard we work our reality will always be a little worse than expected. You might be calling me a hypocrite for portraying such a dismal view of reality, but again a shift in perspective is all that is needed. We could find such liberation in not enslaving ourselves to fantasy and instead just come to terms with all the ups and downs of life. Instead, we should laugh at life's shittiness and accept it as normal than reject it as avoidable.

It's funny to see myself trying to figure out these rules as I run around on the board aimlessly like a headless chicken. But then again, if we all look so stupid, why not just laugh? 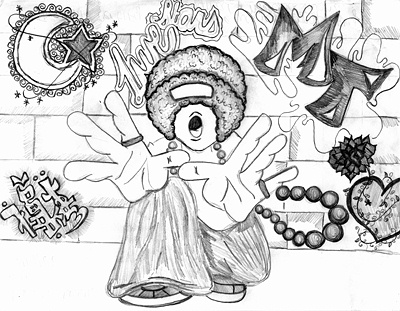 Just a kid from California that thought someone would like to hear this.

Favorite Quote:
"Kindness is the language which the deaf can hear and the blind can see." - Mark Twain

View profile
I love this. It's true, though: we spend so much time trying to perfect ourselves and chasing pointless "dreams" that we don't laugh. Keep it up!