Favorite Quote:
"Do not take life too seriously. You will never get out of it alive."
~Elbert Hubbard

The diary of Anne Frank appeared in shops 74 years ago.  It was written by a young Jewish girl, who was hiding in a secret annex in Amsterdam during World War II. She didn’t survive the war, but her diary did. It is now one of the most famous diaries ever. When the diary had been published for 70 years, a graphic adaptation of it was released, adapted by Ari Folman and Illustrated by David Polonsky. As a teenager whose read both the original diary and the graphic adaptation, I prefer the graphic version. This is because the adaptation makes Anne’s story more humorous, relatable and exciting through imagery, and it blows new life into it for new generations.

The original diary is great to read if you want to know what the actual diary was like and the original text. However, even though it is a very great and historically significant piece of literature, it can be quite difficult to read through all of it. Due to there being so many pages and not a lot happens when she is in the actual annex. It might not have as much plot and action to keep it as entertaining. The graphic adaptation, however, made Anne's ideas on life, in and outside hiding, more interesting and exciting using imagery. They also include a lot of graphics about the war itself and the war through Anne's eyes. The graphic version managed to create eye capturing images and text that give you motivation to keep reading and looking at the comics and drawings. This way the readers can get a great interpretation of what it was like, and understand what Anne is saying better.

An example of that is on one of the frames in the adaptation, on which Anne and the other people she was hiding with are standing on a cloud looking up to a small hole of light. The surrounding of the cloud is darkness, and as her writing above this image says, “but the clouds are rushing closer and closer to us, and the ring separating us from the approaching danger is tightening (this passage is translated form the Dutch version and is therefore likely not the same in the English version but has the same meaning).” This spread lets the reader really understand what Anne feels due to the image. The light from the small hole of hope contrasts well from the dark black clouds that are coming closer. But great imagery is not only created to show Anne's figurative speaking of thoughts, but also to describe the life in the secret annex. For example, on a two-paged frame a detailed drawing of what dinner was like in the annex is shown. All the characters were turned into animals by the artist to match their actions at the table. Their expression and their actions allow for the reader to really understand what it was like there. All the images in the graphic adaptation create imagery and make Anne's experience more relatable and easier to imagine than the diary itself.

Some people might say that “those images are poignant complements to Frank’s words, not sufficient replacements (Ziv, 2018).” But the creators’ point is not to replace Anne's diary and words, it’s to make another form of it, for more groups of people and “to continue to reach new audiences. (Webster, 2019)” and according to Ari Folman himself, “[he wants that Anne's story] reaches young audiences by means of their tools, which are now very visual (Webster, 2019).” because they are now very visual, he and David Polonsky created images for the graphic version, in the hope that it will continue being read by new generations.  The authors also said in an interview that, "We just hope it will inspire [people] to go back to the original diary and read it. It’s a masterpiece, and it’s amazing that a 12-year-old wrote it (Webster, 2019).”

The adaptation really brings out Anne's humor and sarcasm. The graphic adaptation preserved her sense of humor when looking at people and how she described them. The creators themselves said, “we feel this adaptation shows a lot of the funny and brilliant sides of Anne's personality. [...] I love how she shows Madame Van Daan as a character: She is such a drama queen, way over the top, and you could see how much David enjoyed illustrating her (Webster, 2019).” This shows how Anne describes Madame Van Daan for example. Anne liked giving detailed descriptions of characters and narrate their foolish, dramatic, rude etc. Actions. In the graphic version, David Polonsky really managed to capture that into drawings and make, Madame Van Daan in this case, a very recognizable character, that would make you laugh, as said in the previous quote. You may argue that Anne Frank’s diary is too serious to be told in a comic. When the creators were asked their response to this, they simply replied that their goal is not to replace the diary, nor speak in her voice. “We [Folman and Polonsky] are not trying to pretend to be a 12-year-old girl in hiding in Holland. That wouldn’t be sincere; we are not trying to speak through her voice, we just cannot do that. But what we can do is adopt her approach, and for me it is the fact that she uses humor and observation in the most horrible conditions you can imagine (Webster, 2019).” The quote shows that they are adopting her approach, which is humorous and sarcastic, and all of this in horrible times.

The goal of the adaptation was never to replace the diary but to adapt the original diary in order for it to continue being read. The story must be remained in our history and the adaptation will show and tell Anne's story by keeping her sarcasm and humor alive, the adaptation also uses imagery to make her story more entertaining. 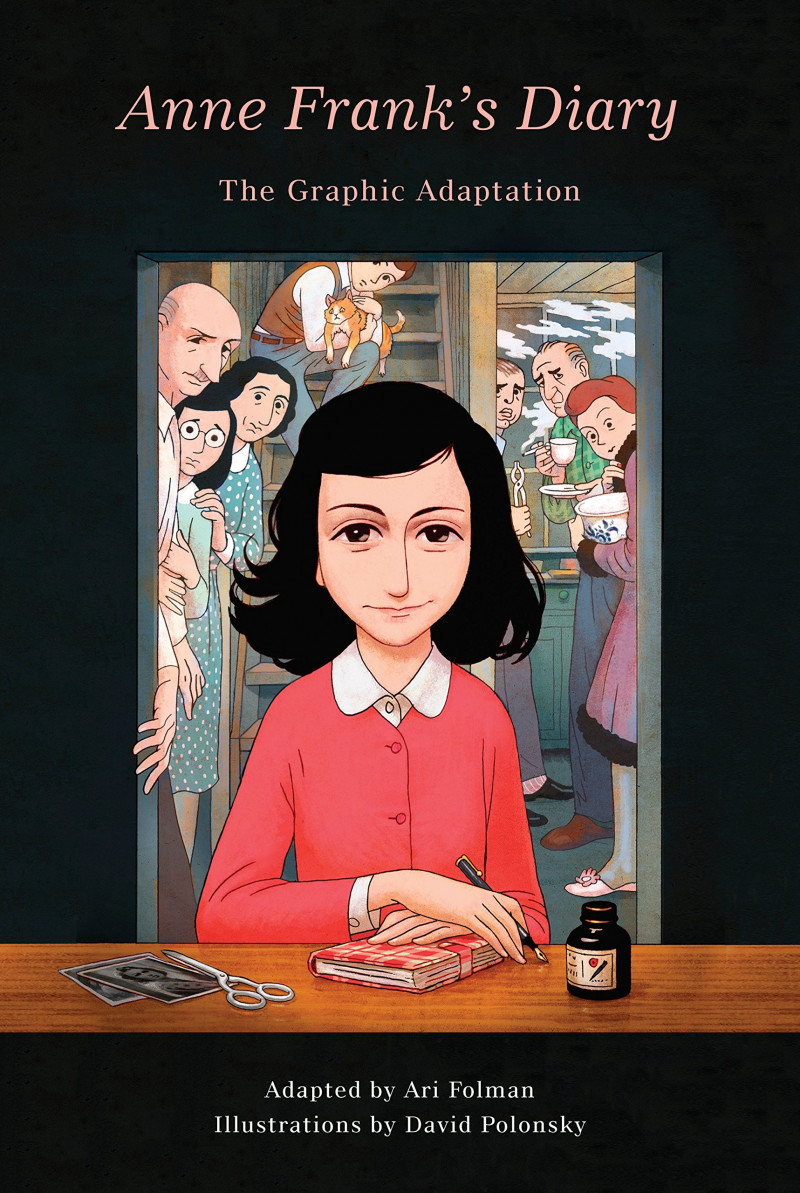