I Am the Messenger | Teen Ink

I Am the Messenger

Ed Kennedy is a regular under aged cab driver with four close friends and a coffee drinking dog. Ed's life doesn't seem to be going anywhere until one event. He saves a bank robbery. Everybody thinks of Ed as a hero. Ed knows what he did was minimal, but he can't get over the thought that he's being watched over, followed. That's when Ed receives the first playing card at his small cottage house. That is the turning point of Ed's life, from Ed the regular guy to Ed the Messenger.

As the Messenger, Ed is told to protect and hurt people in his town. Ed receives messages on playing cards. With each card comes a task. Each task relates to his life in some way. Some are fears (protecting a woman from her husband who molests her every night) and some are things he never had the guts to do (ask his close friend to become intimate). These tasks emotionally murder him and haunt him everyday. By completing the tasks Ed finds the true hero within. When it seems as though every question was solved, one mystery remains. Who is sending Ed these cards and why him?


This young adult novel will make you look into yourself and discover, though it's true not everyone is a hero, everyone has a hero within. That is the main concept of the book and it is just brilliant how well Zusack was able to put that message across. The way he was able to slip in so many unique and amazing writing styles. At one point of the book Zusack even shows up in the novel! I only wish I had been there was it not for Zusack's incredible skill of bringing the book to life. 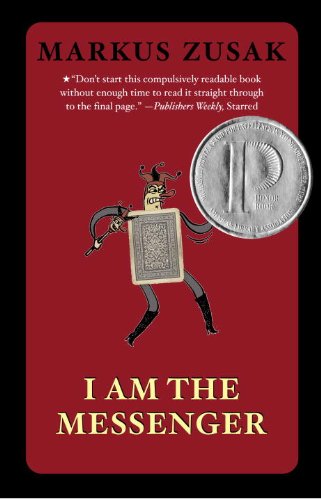 thebookthief SILVER said...
on Jan. 8 2010 at 9:37 pm
thebookthief SILVER, Evanston, Illinois
6 articles 0 photos 5 comments
View profile
Marcus Zusak's writing left me in awe during "The Book Thief". I will definitely read "I Am The Messenger". Thanks!