The Last Song by Nicholas Sparks

The Last Song by Nicholas Sparks is a great read for any female. By no surprise, Sparks has managed to write another tear jerker set in eastern North Carolina, where two people fall unexpectedly in love. The novel begins as Ronnie, a teenage girl, is sent to spend her summer vacation with her estranged father, miles from where she wants to be and a far cry from the kind of place she is used to. Forced to reunite and improve a broken relationship, Ronnie finds that the task at hand is easier said than done. Adjusting to her new life in the south, Ronnie meets Will, “a beach volley ball player slash grease monkey slash aquarium volunteer” (132). After a rough start, Ronnie finds herself succumbing to her true feelings she has toward Will, and experiences some of the greatest emotions of her life. Sparks creates a memorable read through the use of relatable characters and a universal theme along with an appropriately selected setting enhancing the tone of the novel.

Through highly relatable characters in the novel, the reader is able to connect with the emotion and struggles faced in the lives of these people. While reading this book, I really felt a connection to Ronnie, one of the main characters. She is going through a lot of the same problems that teenagers have to face, and it is easy for the reader to feel as if it is happening to themselves. One experience that everyone can connect with is falling in love. Ronnie struggles with the relationship that she has with Will. They even discuss the question that; “if the relationship can’t survive the long term, why on earth would it be worth the time and energy for the short term? (213).” Although they have a rough start, Ronnie opens herself up to whatever their relationship may bring - good or bad. It is easy to sympathize with her as she grows as a character along her journey and considers the important questions such as this one that most people involved in a relationship would think about. At many times throughout the novel, I found myself experiencing many emotions, ranging from happiness when something exciting happened, to sorrow when something painful happened. This novel was one that I really sympathized with, and at times found myself crying as the characters witnessed their own pains. By including distinguished characters who endure universal experiences, Sparks has a way of bringing the readers into the action of the story and keeping them from putting this book down until the very end.

The main theme in The Last Song is the concept of forgiveness. This is a recurring theme throughout the novel, as it is apparent that Ronnie is not going to easily accept what her father has done to her and her family. As the storyline progresses, Ronnie finds out the truth behind her father’s decision and realizes the mistake that she made by eliminating him from her life for the past three years. The point to this story is to forgive one another when the chance presents itself, because a person never knows if he or she will get another opportunity. Throughout this story, Ronnie not only finds that she needs to forgive others, but also herself. She learns this from her father when he tells her, “. . . And one more thing. And of everything I’ve said, this is the most important. You need to learn how to forgive. I’m not talking about Will. You need to learn to forgive yourself first” (372). This revelation was solely the most important truth in The Last Song, and although Ronnie comes to understand what it truly means to forgive, it may have been more helpful for her to know this earlier. Holding a grudge against someone can actually be holding people back from many of life’s experiences, but overcoming the thing that is holding this person back and forgiving oneself - or whomever it may be, will help one to move on with his or her life. By including this in the novel, Sparks shows what it means to be forgiving of others, but more importantly, what it means to be forgiving of yourself.

Sparks’ use of the setting in The Last Song helps to add to the overall tone of the work. Taking place in eastern North Carolina in the town of Wilmington along the Atlantic Coast, the beach plays a large role in the lives of all the characters. An important aspect that it brings to the novel is that it is a place for new beginnings. In fact, on Ronnie’s first day in North Carolina, she literally runs into Will while she is walking on the beach. The two of them meet during Will’s volleyball game after he hits her with the ball and accidentally spills her drink on her. As a place for new beginnings, the beach also develops the sense that another large part of the story is the life of the baby sea turtles. These turtles bring Ronnie and Will together as they both share in the rescuing and protection of the turtles for the duration of the time when they are still eggs. Had the setting not been along the beach, the meaning behind the sea turtles would have been nonexistent, and Will and Ronnie may never have met with common ground to start their relationship on.

After reading The Last Song, I was surprised with the ending. I was really pleased with the book, however parts of it were bittersweet, as Ronnie’s character learned to grow along the way because of the struggles life brought her. Not only did she mature as a character, but she learned many of life’s lessons along the way that Sparks enlightens the reader with, too. Through the use of dynamic characters and an appropriately chosen setting, Sparks creates a truly memorable and enjoyable read with a significant message important for every person to learn early in his or her lifetime 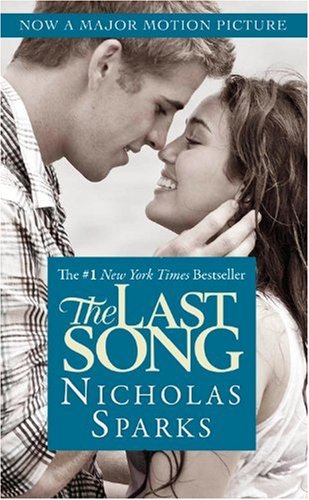