Lord Of Light
By Roger Zelazny

On a planet not unlike Earth (but without doubt not our beloved planet), Sam struggles to live on as his mind passes from body to body. “He never claimed to be a god. But then, he never claimed not to be a god,” is just on of many quotes about the elusive Sam, who is called by many names, but more often than not by the name he implanted in the mind of his followers: Buddha.

When Sam sets out to obliterate Heaven, it makes the gods angry. They send Deathgod, Yamma-Dharma, to dispose of Sam and his “accelerationist” ideals, but Sam escapes when he tricks Yamma into a trap, and even the deathgaze cannot stop him then. Sam then goes on to free the demons of Hellwell, which he himself had bound to that place centuries earlier, and this act causes the Buddha to be captured by the now very irate gods and goddesses of Heaven. With a bit of trickery, love, and fate, and a lot of luck, Sam escapes from his doom in Heaven, Yamma trailing behind with a change of allegiances.

The rest is up to you to find out, should you choose to read Lord of Light. This book is an intricate piece of work, wrought by none other than Roger Zelazny himself. Lord of Light was created with a splash of fantasy and another of science fiction, for a well rounded, very creative, fast paced novel. What could be better than the strangeness of a futuristic society, mixed with a bit of magic? What if the gods and goddesses themselves were pulled from an ancient religion? And what if they were just different enough from their Earth counterparts to be unique? If you would like that, then you would definitely like how Roger Zelazny adds more complex and detailed insight into his characters with every chapter.

Lord of Light is a wonderful novel, with it's satisfactory character development, exciting plot twists, the element of mystery, and the ending, which is for you to find out.

I would recommend Lord of Light to any and all readers of science fiction and fantasy, and those who just want to add a dash of strangeness into their life. 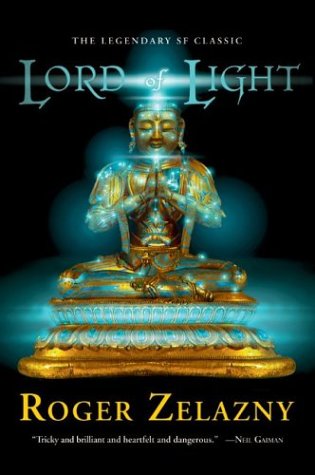