As my classic this term, I read The Last Battle by C. S. Lewis. This was an exceptional book in my opinion. This book was the last in the seven part series The Chronicles of Narnia. Before I picked this book up, I had my doubts about it. I have read the first six books and I didn't enjoy a majority of them. I knew I had to read the last book because I had already suffered through the first six.
‘ This story takes place in Narnia, a fantasy world that is the setting of all the Chronicles of Narnia books. In Narnia animals can talk and there aren't a lot of humans. In all the Narnia books there is a lion named Aslan that everyone listens to. The problem is that a fake Aslan is running around telling people to cause harm to the country of Narnia. When Narnia's inhabitants figure out that they have been deceived by this false Aslan, they have a hard time believing the people that are trying to help them. The best part of this book is the ending because the author keeps it exciting by keeping you guessing about what will happen next. There are a lot of characters in this book. The main characters are Jill and Eustace, they are from Earth. They are trying prove that Aslan is bad, but they have trouble convincing others because the Narnians are very stubborn. Another character in this story is the ape. He is the main villain that fools a donkey into pretending to be Aslan and convinces the rest of the Narnians that the donkey is the real thing.
Anyone who likes Harry Potter will love this book. It's filled with magic, talking animals, and adventure. Another good book in this series is The Lion, the Witch, and the Wardrobe. It isn't necessary to read the whole series to understand these two books. There are also some movies about books in this series, The Last Battle could eventually be a movie also. I would give this book an A+ for your summer reading list because it doesn't take very much time to read and it is still enjoyable. I hope that you pick up The Last Battle by C.S. Lewis. 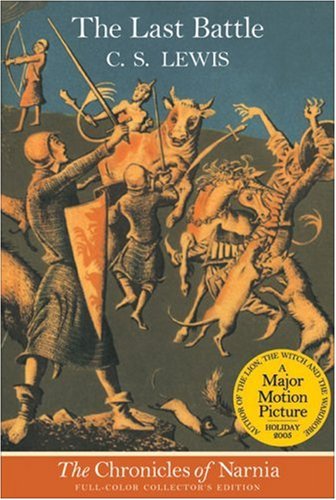