Prince Aleksandar Ferdinand was enjoying his late night at home while his parents were away when his tutors whisk him away for a "night practice." Soon Alek learns that this is just a ruse to get him away. His parents have been assassinated and now he, too, is targeted. He is forced to leave his old life and childhood behind if he is to have a chance at survival.

Deryn Sharp is determined to fly, but there is one difficulty. She is a girl. With some help from her brother, she dresses as a boy and enlists in the Service. Soon, she is a midshipman on the Leviathan and getting into more trouble than she could ever have anticipated.

With the aid of a sword-wielding count, a mechanik, Darwin's eccentric granddaughter, and many assorted strange creatures, they embark on a voyage of danger and excitement, with the occasional detour into the bizarre.

I liked this book. It is set at the very beginning of World War I, only the world is very different from how history remembers it. Huge, monstrous machines are used for transportation and war, and genetic engineering (called fabrication) has advanced beyond any level of probability. Whole ecosystems travel through the air. Scott Westerfeld has created a world that fascinates and delights the reader, or, at least, this reader.

This book was well written, though the new vocabulary takes a little bit of getting used to. What sort of curse is "barking spiders?" However, the quirky words and phrases added a bit of fun to the dialogue. I loved the Derynisms.

Alek and Deryn are fun in their different ways, but this is a book where the world is more important than the characters. Alek is a little bit arrogant, but not painfully so, and he has a very clear sense of what is right and wrong. Deryn is highly entertaining. In her attempt to retain her disguise, she sometimes acts more like a boy than some boys do. Both characters are impulsive and have no sense of false modesty. 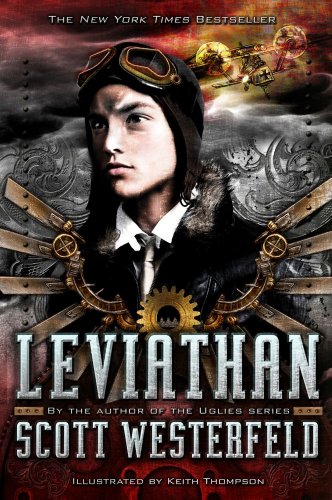 Ninja_Writer BRONZE said...
on May. 5 2011 at 4:58 pm
Ninja_Writer BRONZE, Western Springs, Illinois
3 articles 0 photos 27 comments
View profile
I just got finished with this book and was pleasantly surprised to see someone had reviewed it- I really liked it! Good review, by the way :))
LiederMadchen ELITE said...
on May. 3 2011 at 6:59 pm
LiederMadchen ELITE, Aurora, Oregon
132 articles 0 photos 25 comments

View profile
I liked Deryn better, too. :) Behemoth (book 2) was wonderful, and Goliath (book 3) looks fantastic!
InvisibleNerdGirl said...
on May. 3 2011 at 5:52 pm
I'm reading this right now! So far, I like Deryn better, but I'm only on chapter 6. They have a sequel too, you know. And the third book's coming out this year, I think.