Billy Bannister has lead a fairly normal life, except for the fact that his breath is impossibly hot, which sometimes gets him into trouble and led to the nickname of "Dragon Breath." But what if it isn't just a nickname? Billy is shocked when his father reveals that he is a dragon, making Billy a half-dragon.

Bonnie Silver has led a less than normal life. At school, she constantly wears a backpack. No matter how much the other students tease her, she never takes it off. If she did, they would see her wings.

The dragons changed into human form centuries ago in order to escape the slayers. Now, the slayers are back and targeting the Bannister family and Bonnie.

This book is a bit predictable, but still good. Billy and Bonnie are likeable, interesting characters. I like that they do not have the modern, exaggerated teen-age attitude of so many books. Billy is the doubtful one, always questioning, while Bonnie's faith is so strong you can almost taste it. The secondary characters were also good, particularly Professor hamilton and the Foley family.

This is the second time I have read this book, and I actually like it better now than I did then. The first time, I thought it was a little stiff, but on my second read-through I noticed no such thing.

I am a huge Arthurian fan, so I liked that this book had some of those legends mixed in. I cannot resist a book that has both Merlin and dragons.

I would recommend this book to kids who like fun, adventurous, wholesome reads. Raising Dragons is the first in a long series and you will have to read them all. You are warned. 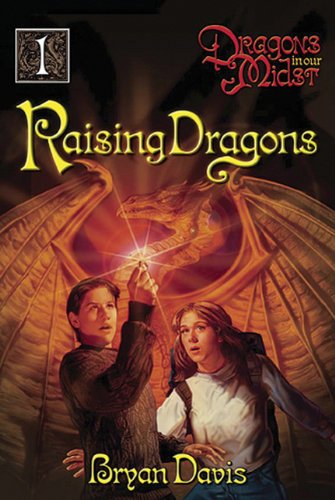