Have you ever felt the overwhelming urge to throttle an author simply for ending a book? Well, that is how I felt at the end of City of Fallen Angels. I mean, really, it was shorter than the previous books and did it have to end there??? And I have to wait a whole year before the next one comes out? Grr. I really shouldn't read books in a series until they are all released, but I can't help myself. I must be a masochist.

This book was fantastic. I had heard that Jace was not at his best from other reviewers, but I don't agree. Sure, he wasn't quite as entertainingly sarcastic as usual, but with everything going on in his head, who would be? I would have found it strange if he had been his usual self. As it is, he was even more tormented and vulnerable than ever before. Clary was her lovely, spunky self throughout, supporting her friends with her faith in them even when they didn't have faith in themselves. She seems to be growing up faster than the boys, but then again, if she didn't, who would look after them?

As for secondary characters, one of them has graduated. I don't think Simon counts as a secondary character anymore. From the sweet, friendly boy of City of Bones, he has grown into a complicated (not to mention undead) young man with serious romantic issues. There were some times when I wanted to bash his head against the wall and others where I wanted to give him a hug.

Magnus managed to be entertaining even from hundreds of miles away, which is no mean feat, but I wished that he played a larger part in the story. I like that Alec was developed a bit more, even though he is such a girl sometimes. I really liked Isabelle in this book, even more than before, and I can hardly wait to see what happens with her and a certain someone... :)

The level of teenage-angst in this book was through the roof and well on its way to the moon. Tense relationships and raging hormones exacerbated by near-death experiences...you get the picture. There were points when I was tearing my hair and mentally yelling at the characters (wouldn't want to yell out loud and frighten the neighbors), ordering them to communicate better. They mostly ignored me, but it was worth a shot.

I am glad that I read Clockwork Angel before City of Fallen Angels, there were several references that I would have missed if I hadn't. However, it raised even more questions about what might happen in Clockwork Prince, which in turn increased my cliffhanger-fueled frustration. Especially those hints about Magnus and Will...hmm.

I would recommend this book to anyone who has read the rest of the series and doesn't mind an oh-so irritating cliffhanger that will keep them grumbling until they can get their hands on City of Lost Souls. 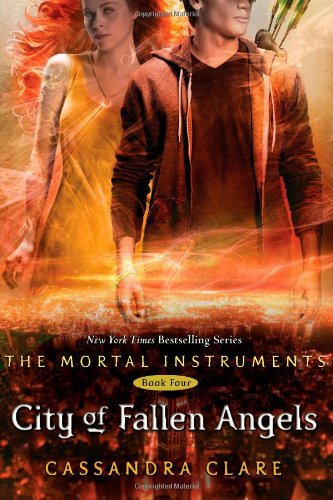 This review totally sums up what I felt in CoFA. I spent most of it wanting to strangle the other characters as they went about being all annoyingly dense and totally misinterpreting pretty much everything those close to them said. And I do wish Magnus and Alec had been in it more, but seeing as she hadn't planned to write them in originally, I'm glad they were in it anyway.

This was a wonderfully written review, and it summed up the book nicely without any spoilers. Well done. :D