This book is beautiful and strange and sad. It reads like a fairy tale, with a girl lost in the woods meeting a handsome, dangerous stranger. She convinces him to let her go for a day so she can find her true love, but what if her true love is nowhere to be found?

Keturah is sweet, somewhat naive, and occasionally downright foolish. She struggles for true love, not understanding that it is not something to be won but instead has to be given. Through the story, she grows in wisdom and eventually learns things she thought she already knew. Even as ­Keturah both prepares for and fights her death, she tries to protect those close to her. While looking for her true love, she helps others find each other. I love her selflessness.

As for the menfolk in the story, Lord Death is attractive in a mildly creepy way, and his son, John, is kind, caring, and likable. While Lord Death offers, well, death, John offers a life as lady of the manor. Ben, the village boy who thinks he must marry the Best Cook, is simply not too bright, but friendly enough. Since Keturah is the bravest, loveliest, and the best cook around, all vie for her affections.

This story is beautifully written, dramatic, and lyrical. I could see the dark forests and medieval villages as well as the many secondary characters. Though not funny, there were instances of dry wit and humor that made me smile.

Parts of the story were a little weird. Would choosing to go with Lord Death be a form of suicide even if you didn't technically kill yourself? That is only one of the odd philosophical questions you'll find.

Keturah and Lord Death was an interesting read, and I really enjoyed it, but I don't think it would be for everyone. It is frankly rather strange. 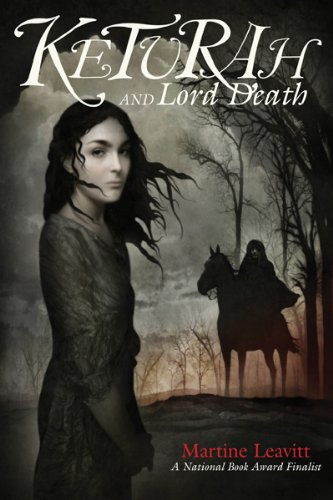 View profile
You're right. I think it's a weird editing error that occurred after I submitted the review to TeenInk, because on other sites (Amazon, etc.) where I posted it that sentence is different. Here it seems to be missing a word or two...
lylacks SILVER said...
on Jun. 23 2013 at 2:38 am
lylacks SILVER, Erie, Pennsylvania
6 articles 0 photos 3 comments

Favorite Quote:
"She felt as if she knew the stars, and had been among them, or would be." -- Mark Helprin

This is one of my favorite books. :) I need to reread it, though, because I thought John was the son of the governor-like man of Keturah's town, not the son of Lord Death. Either way, death has always fascinated me. This book, as you said, is like a fairy tale. A dream of sorts with some unattainable meaning.

Favorite Quote:
Greater love has no man than this, that a man lay down his life for his friends. ~John 15:13

"Give me liberty or give me death!" ~Patrick Henry

Be brave and steadfast; have no fear or dread of them, for it is the Lord, your God, who marches with you; he will never fail you or forsake you. ~ Deuteronomy 31:6

Wow I've never actually heard of this book before..awkward.  Anyway I'll check it out sometime if I can find it.

Thanks for writing this review LiederMadchen!

Favorite Quote:
"Do not pity the dead, Harry, pity the living. And above all pity those who live without love"
~Albus Dumbledore (J.K. Rowling)

View profile
*splutterflaildie* OH MY GAWD I LOVED this book! I'm not a big novel reader, I prefer series, but Keturah and Lord Death changed my life. It's one of three novels that I read and can't imagine a life where I didn't hold their stories close to my heart. Thanks for writng this review, hopefully some more people will discover this amazing book through it.