Favorite Quote:
I dwell on the past, love the present, &+ can't wait until the future. <3

The book, Night, by Elie Wiesel is a heartbreaking flashback of Elie's life during an unfortunate event, the Holocaust. Looking at Elie Wiesel's way of surviving the Holocaust can well educate individuals about the general idea of human survival. The Holocaust was a very heart wrenching event. There was an enormous amount of tortured victims involved in this event. Luckily, there are few individuals who survived, such as Elie Wiesel and Viktor Frankl, who wrote about the Holocaust. Due to this, it's easier to become well educated on history, and with strain from experiencing what our ancestors have.

While reading Elie Wiesel's autobiography, I felt as if I had actually lived through it. The excruciating feelings and details positioned me in a unique state of mind. I felt as if I could actually see a man "crawling snakelike in the direction of the cauldrons." I could imagine myself in Eliezer's place, hearing my father call out, "Eliezer... Eliezer... tell them not to beat me... I haven't done anything... why are they beating me?" This piece of writing has really taken a toll on me. It makes me even more gracious towards God, because I haven't experienced anything as unendurable as the Holocaust.

Being a teenager during the Holocaust had advantages and disadvantages. Elie Wiesel appears to be a very strong, independent individual. It takes great courage and compassion to do the things Elie did for his family, especially his father. Even when he felt like it would be much simpler to give in, he continued on with an impeccable endurance. His journey through the concentration camps transformed him from a boy, to a young adult, making him the educated, experienced man he is today.

The Holocaust is a heartbreaking past time, which should be known by many. The United States Holocaust Memorial Museum in Washington D.C. is a very significant example of how much torture and hurt the victims obtained. I have visited the museum twice, and both visits have shown me how incredible the human race truly is. To withstand such harsh conditions, vulgar treatment, and unusual punishment, shows what an outstanding creation we truly are.

The emotions I gathered from this writing, my opinion on Elie Wiesel, my thoughts on the Holocaust, and my knowledge on the human ability to survive have taken a great effect on me. Elie Wiesel, in my opinion, would be a great mentor to converse with. I feel as if i could learn an immense amount from him. The description of his life in his autobiography gave me a sense of knowledge that I haven't received from any other writing that refers to the Holocaust. I would highly recommend Night to anyone seeking education on this past heart wrenching event. 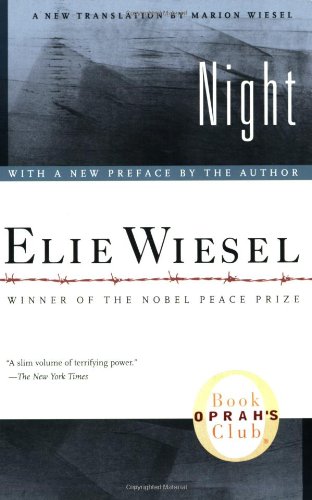 
Buy from Amazon
The author's comments:
I hope you enjoyed my book review. Obviously, I focused on more than just the book itself. Please comment with any feelings, opinions, or suggestions about my writing. Thank you. :)
Post a comment
Submit your own

Favorite Quote:
I dwell on the past, love the present, &+ can't wait until the future. <3

View profile
Yes, I agree with you completely. This book really changed my outlook on things.
JojoMimi BRONZE said...
on Sep. 14 2011 at 12:04 am
JojoMimi BRONZE, Portland, Oregon
4 articles 0 photos 52 comments
View profile
I read that book too. It was sad. My heart ached for Eli. I learned so much from this book, and I will never forget this story. I know that I would never have survived under those conditions, and I greatly admire the survivors of the Holocaust. Their bravery was incredible.