I absolutely loved the book Midnighters: The Secret Hour by Scott Westerfield. It has plenty of action, adventure , suspense, mystery, and ,basically, a little bit of everything.
It starts when a 15-year old girl named Jessica Day moves from Chicago to the town of Bixby, Oklahoma. Other than some abnormal people and abnormal things, like the taste of the water, Jessica thinks the town is pretty normal. But after waking up to a room bathed in blue, yet with no shadows, she quickly realizes it isn't. Jessica is plunged into the world of the 25th hour, a secret hour kept for monsters, aka Darklings. In the 25th hour, almost all humans and all thier creations are frozen, and it passes by in a split second for them. The ones who aren't frozen, the Midnighters, are blessed with special abilities, in the 25th hour. Dess is a polymath, someone with extraordinary math skills, which happens to be the Darklings weakness, along with technology. Rex is a Seer, someone who can read the ancient hidden history of the lore and Darklings. Melissa is a mindcaster, someone with telepathic abilities. And lastly, Jonathan (who ends up becoming Jessica's boyfriend), is an Acrobat. Gravity has no effect on him in the 25th hour. Up until Jessica arrived, the darklings haven't troubled any of them. After having to rescue Jessica from being attacked by the ruthless devils, they know that Jessica's power is really powerful, enough to scare the Darklings. For the sake of her life, Jessica teams up with the rest of the Midnighters to keep the Darklings at bay, and find out what her mysterious ability is.
What happens next? You need to read this incredibly amazing book to find out. This book is definitely a 10 out of 10. The plot is awesome, filled with unexpected twists and mesmerizing details. You literally have to read all of the 383 pages in one sitting. Scott Westerfield is a mastermind, and this book is a must-read. The Midnighters is a trilogy, an it's also on of the few cases where the sequels are just as super as the original. You have to read this book! 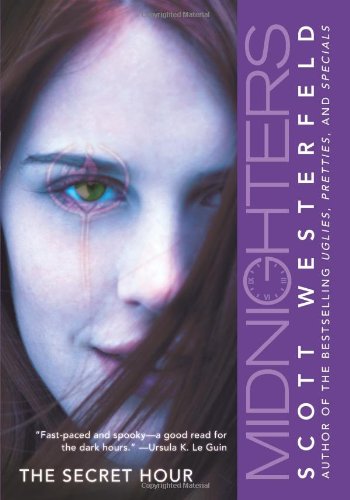