A Monstrous Regiment of Women by Laurie King | Teen Ink

A Monstrous Regiment of Women by Laurie King

This is the darkest book in the series, and one of my favorites. Holmes and Russell have been together for years now, and their relationship is going through another change. Russell is now an adult and ready to explore. When she takes a case of her her own, Holmes has to take a step back and let her go her own way. This book is the one that really sets the tone of their future partnership. Holmes' understated yet very intense emotions come even closer to the surface when Russell is threatened, adding another layer to their already complicated feelings.


The character of Margery Childe is complex, unique and fascinating. She has such a mixture of passion, intelligence and ignorance. Her vibrant personality draws people to her like moths to a flame, including Russell. People around Margery are dying, but is she the one to blame? Margery's theological philosophy combined with Russell's expertise in the field lead to some interesting conversations that really get you thinking. Also, Margery is a wonderful illustration of both the pros and cons of extreme feminism.


Drug use plays a very important role in the story. First with young Miles, the fiance of an old friend of Russell's who has returned damaged from the Great War. Then with Russell herself. Not wanting to give anything else away, I will just say that the latter half of this novel becomes deeply personal and painful for both Russell and Holmes.


I became so engrossed in the characters of this novel, their flaws and imperfections, their emotions and reactions. This novel has some of the best character development I have ever seen. I would recommend this book to all lovers of mystery, historical fiction and well-written characters. It is not one to be missed. 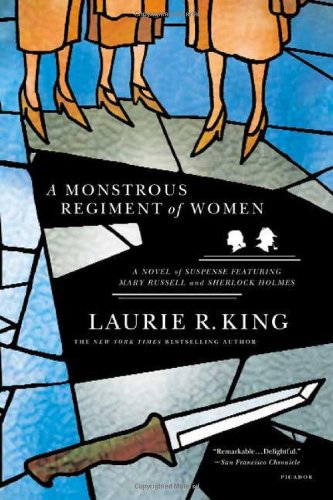