Favorite Quote:
"Don't be the wave that crashes." "Get in my belly!"

The 20ll release of Becca Fitzpatrick’s Silence, the third installment in the Hush, Hush saga, continues the thrilling story of the fallen angel, Patch, and his forbidden love, Nora Grey.
This follow up to her 2009 first debut novel, Hush, Hush, and the 2010 Crescendo, keeps the quick-paced flow going. Fitzpatrick has already greatly written about Nora overcoming Patch’s dark past filled with secrets, faced tests of betrayal, loyalty, and love, and portrayed the ongoing battle between worlds, but the story continues.
In the novel, Nora returns after having been missing for three months and having no memory of the past five. Things had changed while she was MIA, and Fitzpatrick’s written words let the reader feel Nora’s frustration themselves. Everyone around her, the reader included, knows the events that have taken place that she has been wiped clean of. So, at times it was irksome when what was going on was very clear but she was in the dark. Patch is kept true to his characterization: dark, sexy, and enticing, although a little subdued in this new novel. The author’s great development of her characters not only holds true with the main ones but also with the story’s sidekicks like Vee, Scott, and Marcie.
As like the first books, the plot line is filled with suspense. Secrets are tied in with almost every character. Fitzpatrick will once again have you questioning Patch’s true loyalty the farther the story unfolds and a cliffhanger will have you begging for the fourth book that is said to release in the Fall of 2012. Silence, is a page turner just as the others were and will have its claws hooked in you from the beginning. Although Nora and Patch’s coming together is of course predictable, it won’t stop your heart from pounding at the mention of his name. This book deserves five out of five stars, a must read. Fans of the first two installments will not be let down. 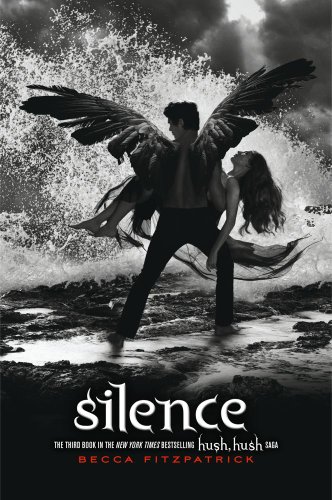