I love Claudia Gray's writing style. It grabs you and immediately pushes you into whatever world she is trying to portray, whether it be the dark halls of Evernight Academy, or, in the case of Fateful, 1912 England. Right before the Titanic sails. The history was what I loved most about this book. The sinking of the Titanic is such a fascinating, tragic event for anyone who loves history, and this book perfectly shows the many things that might have happened to people on that ill-fated voyage. (Except for the werewolves, of course.) You see the hope of so many as they travel to America to make new lives for themselves, the decadence of the first class passengers and the bravery of the crew. Ms. Gray invented the entire principal cast of players, yet they are all very believable as people of the time.

Tess Davies, our heroine, is a lady's maid traveling with the somewhat dysfunctional Lisle family. Being an enterprising sort of miss, Tess does not plan to be a maid forever but rather start anew in America. Her plans are disrupted by mysterious gentleman and wolves even before the ship sets sail. She meant to just quietly go about her duties through the trip, but finds herself embroiled in a battle of wills between two werewolves. Alec and Mikhail. To complicate things further, she finds herself falling in love with Alec, though she knows nothing can happen between a servant girl and a first class passenger, even without all the supernatural goings on. I do love Tess; every inch the proper maid, she keeps secrets and faces the most shocking discoveries with a complete lack of hysteria. Her sensible beliefs are turned upside down and though she knows she shouldn't get further involved her heart won't let her start.

Alec is a dreamer whose future fell apart when he was bitten. While a dangerous pack of powerful werewolves want him and his father's influence at their control, he is determined to retain his freedom, but freedom can come at a terrible cost. I love his bravery and stalwart determination as he tries to protect everybody without losing himself.

The minor characters in this novel are as wonderful and well-developed as the main ones. Alec's father is wonderful; strong and supportive while so scared for his son. Tess shares a room with a Lebanese woman named Myriam and two elderly Norwegian ladies who speak no English. The ship is full of passengers from everywhere in the world. The crew is represented by one Seventh Officer Mr. George Greene, and unflappably English gentleman. The Lisle family are as different from each other as family members can be with kind Irene, pasty Leyton and overbearing Lady Regina. These are just a few of the lovely minor characters and you can't help but become involved in their fates, though you know they won't all survive the end.

My one disappointment in this novel was that in Ms. Gray's other books there was always some magnificent plot twist that you didn't see coming (read Evernight and you will see what I'm talking about) and in this one there was not. However, that only barely diminished my overall enjoyment of the story. 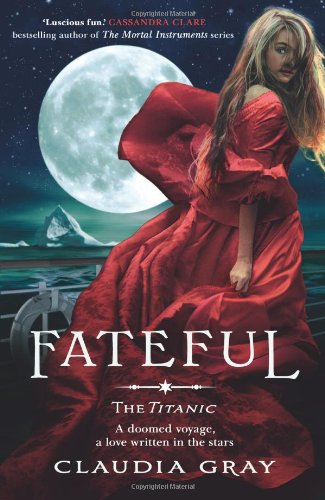