The Deception at Lyme by Carrie Bebris | Teen Ink

The Deception at Lyme by Carrie Bebris

I was so excited when Ms. Bebris announced that she was finally writing her Persuasion novel (having written mysteries to tie in with Miss Austen's five other published works already). Mr. and Mrs. Darcy, accidental detectives, were finally going to meet the Wentworths. At Lyme (I love Lyme).

The Deception at Lyme had all the things I loved about the previous books in the series - fun characters, complicated mystery, a bit of danger, a bit of humor and, especially in this case, romance. One thing it didn't have was any hint of the supernatural, but the very human mystery more than made up for the lack of magical influence.

I love how well the author incorporated the characters from Persuasion into the mystery. Mrs.Clay, Mr. Elliot and Sir Walter Elliot are all perfectly portrayed in all their less-than-likable glory, tangled in ambition and deceit. Captain Wentworth and Mr. Darcy get along famously, as I have always suspected that they would. My two favorite Austenesque heroes working together at last (sigh). The new characters were wonderful as well, especially the two gentlemen who take an interest in Georgiana (much to Darcy's chagrin). The charming Sir Lawrence and the enigmatic and possibly villainous Lieutenant St. Clair. Watching Darcy's discomfort was highly entertaining.

I would recommend this book to anyone who likes cozy mysteries that you can curl up with on a rainy afternoon, and, of course, to anyone who loves Jane Austen's marvelous characters. 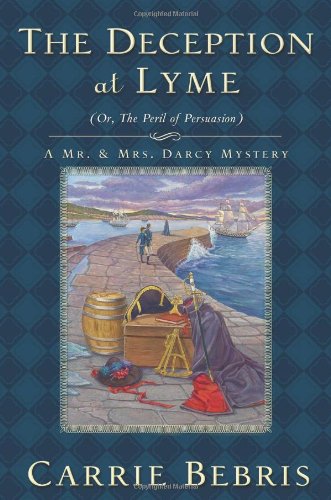 
Buy from Amazon
The author's comments:
Thank you to Cassie at Tor / Forge for sending me a copy to review. :)
Post a comment
Submit your own