Ash Mistry hates India, with its burning ghats, narrow alleyways, and snake charmers. When he stumbles upon an archaeological dig and discovers a golden arrow hidden within its walls, everything changes. A powerful and wealthy man, Lord Savage becomes very interested in the arrow, willing to give him and his family large sums of money to get it back. Soon after Ash refuses, he is being chased in the streets of India by Lord Savage and his demon henchman, who can morph in and out of their monstrous form. Ash and his little sister Lucky must learn to survive; running, hiding and fighting to stop Lord Savage from getting the only thing that could stop him from achieving his malevolent schemes.
Sarwat Chadda has does a brilliant job with this novel, exciting a whole generation of Percy Jackson fans and reluctant readers by giving them a taste of Indian mythology. Ash is well-drawn and believable; a spoilt, overweight teenager whose biggest problem before he goes to India is his Nintendo DS batteries running out. He and his sister Lucky not only take deep pleasure in annoying each other but getting each other and themselves into mischief and trouble. Throughout the book Ash matures deeply, taking things more seriously and always looking out for his sibling. The plot races along at a brilliant pace, slowing down perfectly for scenes that reflect Ash’s and other characters moods. The villains are excellent; Lord Savage, a crumbling, immortal noble with startling blue eyes, and of course Ravana - the demon king.
The book undoubtedly has a lot of violence, from the descriptive murders of Ash’s friends and family, to the gruesome acts and descriptions of Lord Savage’s demon henchmen. Sarwat paints vibrant pictures in the reader’s head with his words and some of the pictures aren't so pleasant. Despite the blurb saying the target audience is nine and above, I think that the reader should be at least ten.
Ash Mistry and the Savage fortress will not fail to delight all readers, not only is it a brilliant read, Sarwat Chadda introduces a whole new culture for children to learn and read about. Before this book Indian mythology was almost unheard of in children’s literature, so readers will be eager to read something entirely new. This book is highly recommended. 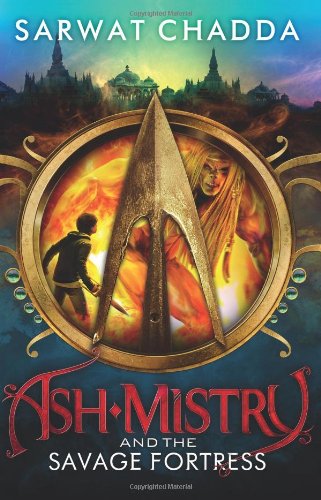