The Phantom of the Opera by Gaston Leroux | Teen Ink

The Phantom of the Opera by Gaston Leroux

Favorite Quote:
Pain is life, and life can be beautiful with all its scars and flaws.

The Phantom of the Opera is a book of betrayal, love, and the power of music. The book takes place in Paris, France ranging from somewhere in between the mid 1800’s and beginning of 1900’s. The book revolves around an orphaned, chorus singer named Christine Daaé. Upon arriving at the Paris Opera House, she begins to hear an angelic, haunting voice which she believes to be the Angel of Music her father promised her on his death bed. When she asks if it is, the voice says yes, but truly the voice belongs to a physically deformed and emotionally scarred man named Erik, who was one of the architects of the opera but secretly built himself a home under it. The anonymous voice begins to tutor her, secretly falling in love with her, until she manages to find the limelight on the old manager’s retirement gala, also gaining the attention from an infatuated old childhood friend, the Viscount of Chagny Raoul. He introduces himself, and Erik notices her affection for the viscount and becomes insanely jealous. As the story unravels, unlikely characters will help the star-crossed lovers stay together. Erik’s past will be revealed and things will take a deadly twist. The time will be ticking and Christine will have to choose in between her living nightmare or the death of her lover and many more.

The places in which the book takes place ranges from the shining stage prop Apollo’s Lyre where a forbidden kiss takes place to the catacombs of the underground labyrinth that shelters the crazed musician who has created and keeps creating his opera “Don Juan Triumphant”. The drastic changes in scenery assists in setting the mood of what Christine’s love triangle varies from. Erik and his tenebrous settings show the darkness in which Christine is forced to return to every time, but Raoul and his light, welcoming atmosphere like Apollo’s Lyre are symbolic to how free she feels when she’s around him. Paris is the so-called city of love, but it is also known for its melodramatic stories without knowing that one such love triangle could’ve brought the end of the Paris Opera House.
Christine Daaé grew up with her father, a Swedish violinist that traveled around Europe playing religious music for weddings and similar events. She was introduced into the story at the beginning of the novel. Her mother died when Christine was twelve, giving Christine no real motherly figure to look up to and leaving her father with a child. Christine was brought up tutored by her father in the arts of music. The book briefly mentioned her childhood, giving faint hints of one memory. While residing somewhere near a beach, she met Raoul, the young Viscount of Chagny, who saved her scarf from the sea. Christine was brought up in naiveté, giving her a tremendous disadvantage when encountering the masked voice who claimed to be the Angel of Music, who in reality was the beautiful snake from Eden. In her curiosity and childlike demeanor, she ate the apple and fell right into Erik’s trap.
A theme in The Phantom of the Opera was that not everything is as it first appears. Christine was too quick to believe that Erik was the angel sent to her by her father that she didn’t stop to realize that people aren’t always honest. This is a major theme because the whole book practically took place because of Erik’s deceitfulness. Another scene in which this theme takes place is when Christine hides her secret of the angel of music from Raoul. Raoul thinks that she is hiding it from her because the man he hears could be her lover, but in truth she was trying to protect him from the phantom’s wrath.
This is a book highly recommended to anyone who likes detective and suspense novels. The mood is set to keep the reader always at edge, attentive to every detail that occurs. The characters are so profoundly portrayed that the reader is oblivious to the addiction crawling under their skin, driving its claws deep into their heart and settling there. This book clearly deserves five out of five stars. 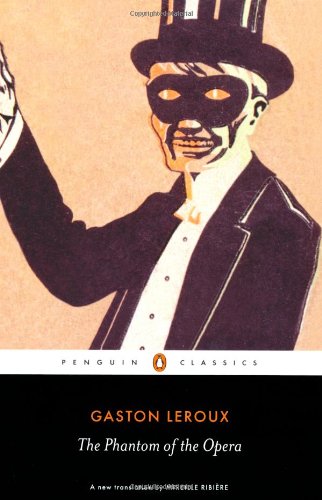 
Buy from Amazon
The author's comments:
This is a book review for my class but since I decided to type it I decided that I should also share it with others considering it is pretty good. :) I mean, I've seen better, but hey.
Post a comment
Submit your own